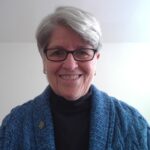 Ann Scholz, SSND is a member of the School Sisters of Notre Dame, an international community of women religious ministering in more than 35 countries and dedicated to transforming the world through education.

Sister Ann joined the staff of the Leadership Conference of Women Religious (LCWR) in September 2011 as Associate Director for Social Mission. In that capacity she coordinates LCWR’s efforts to address the systemic causes of injustice and effect social change. She is responsible for advocacy, education, and organizing to help shape public policy.

Currently, LCWR focuses its collective voice on some of the most pressing issues of the day including racism and white privilege, immigrant rights, environmental justice, human trafficking, nonviolence, and economic justice.

Prior to joining LCWR, Sister Ann served as the representative of the School Sisters of Notre Dame to the United Nations’ Department of Public Information (DPI) and the Economic and Social Council (ECOSOC) where she sought to bring the values of the SSND community to bear on the deliberations and decisions of UN member states. In cooperation with other Non-Governmental Organizations (NGOs) she focused on the needs and concerns of those members of the global community who are too often neglected—women, children, and those living in poverty.

A former secondary social studies teacher, Sister Ann earned her MA and PhD in International Education from the American University in Washington, DC. She served as Associate Professor of Education and Director of Study Abroad at Notre Dame of Maryland University from 1991-2002 and was instrumental in expanding opportunities for students and faculty to do academic work abroad.

What calls you to NETWORK? Where do you find inspiration in this work?
Her passion for Catholic Social Teaching and the call to build God’s beloved community resonate with the mission and ministry of NETWORK.

What do you like to do outside of NETWORK?
Spending time with her SSND community and her extended family and friends brings Ann great joy and reminds her of the importance of relationships in all that we are and do.