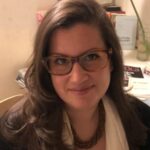 Vanessa Wibberley Denier is an independent Catholic political theologian and founder of The American Communion Project for the revival of Catholic Social Teaching. She describes herself as a Sermon on the Mount Christian and a Vatican II Catholic. She has a bachelor’s degree in philosophy from the University of Maryland, a master’s degree in theology from Xavier University, and is currently a recipient of the David and Elizabeth Zaslow Memorial Ph.D. Fellowship in Holocaust and Genocide Studies at Gratz College. Her work includes reviving the social justice-oriented approach to Catholic Social Teaching. She is a subject matter expert in the historical development of Catholic Social Teaching in the United States and Latin America. Her political ministry focuses on “Generation None,” an intergenerational cohort of Americans who no longer self-identify with a religion. Her research interests include the theological and philosophical underpinnings of genocide and mass atrocities, Catholicism’s role in the rise of Nazism, and the subsequent response of Vatican II. Her research hopes to advance a political theology for genocide and mass atrocity prevention in the global Catholic church.

What calls you to NETWORK? Where do you find inspiration in this work?
Her inspiration is “the flower growing in the crack in the sidewalk.” She argues that we in the Catholic social justice movement cannot retreat to a safe environment. Rather, we have to learn to thrive everywhere, even in the most inhospitable circumstances. That’s why she moved from Washington D.C. to Ohio. There are advocates and witnesses for social justice in every corner of the country. They continue to work and grow even where they are met with hostility and disdain. She researches and writes for them, to share with them the language, the narrative, and the long history of the Catholic social justice tradition. That tradition is the fertile ground for our work to organize the future for social justice. That’s what called her to NETWORK.

What do you like to do outside of NETWORK?
Vanessa is also a co-partner of a communications consultancy firm that specializes in worker and union advocacy, but she has worked on other special projects, most notably, library digitalization of Holocaust testimonies for USHMM and Yale Fortunoff archives. She is also the executive director of a Cincinnati-based non-profit that partners with the Cincinnati Health Department on a joint project, “The Air We Share,” to identify and overcome tobacco-related health disparities in Avondale, the largest African-American neighborhood in Cincinnati. Her favorite pastime is horseback riding in the Great Parks of Hamilton County.