Resisting the Lie of White Jesus

Brown-skinned, poor, no home to call his own: this is how Jesus entered our world.

This is not the image that we in the U.S. typically think of. With the rise of European influence on Catholicism during the past few centuries, the Jesus we came to worship transformed into one that looked like the people in power: white. 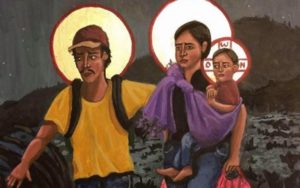 I’m certain that the blonde-haired, blue-eyed, light-skinned Jesus does not look like the very Jesus that was born in Bethlehem more than two millennia ago. But which image is featured more prominently?

As Christianity grew and was used as a tool of power over centuries (think: Spanish Inquisition, colonialism in many parts of the world, Native American boarding schools, and other similar practices), dominant forces co-opted Jesus’s race to show that the religious leader others should be following looked like the people in charge.

The irony is that Jesus was condemned to death by the very people in charge, who didn’t share the same background as him. This idea–of a savior fleeing violence, of a messiah born into chaos–is important to remember today. This image is much more representative of our current reality of refugees and asylum-seekers coming to the United States than the gold-haloed images of the Holy Family as portrayed in most religious circles.

In the Latin American tradition of Las Posadas, community members reenact Mary and Joseph’s journey to Bethlehem, and their search for a place  where Jesus could be born in safety. Two people playing Mary and Joseph walk to designated churches or homes, singing and asking for a place to stay, while crowds follow behind them. It is a visceral, spiritual reminder of the desperate hope for welcome Mary and Joseph felt while anticipating Jesus’s birth: a similar hope that motivates families fleeing to the U.S. southern border at the moment.

Like what happens in las posadas, our government is not letting these families in. “There is no room for you,” Customs and Border Patrol essentially tells them. A familiar line for those who know the nativity story.

Instead of a stable, many migrants cannot find any place to rest. We are offering them no safe resting place for their children, but cages instead.

Members of the current administration, ironically, claim to use principles of their faith to guide their policies. It is this same faith, though—based on the life of Jesus—that should call them to extend welcome to the asylum seekers at our borders.

Jesus wasn’t white. In the U.S., due to the intertwined systems of oppression that make up racism and classism, the communities affected by these institutional harms are not white, either. Jesus, too, was affected by these “isms” in his life, but how quickly we forget.

When we continue to depict Jesus as white, we hide the fact he too was considered “other,” different from the powerful majority. In overlooking this critical history, the figure of Jesus is no longer an outsider preaching welcome and a radical love, but a member of the dominant ruling group whose name is weaponized in order oppress the “other.”

When we as a culture whitewash Jesus, we forget from where he came, and the circumstances he was born into. By remembering Jesus as an outcast, a refugee, a carpenter’s son, we can better understand the radical nature of his teachings in our current political climate.