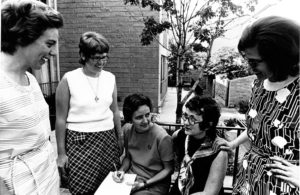 In December 1971, a group of Catholic sisters voted to create a nationwide “network” of women religious who would engage in political activism at the federal level for social justice. Representing diverse ministries including direct service and community organizing, the 47 sisters from across the U.S. were meeting in Washington DC at a time when the church was undergoing dramatic changes in response to Vatican II reforms and calls to create “Justice in the World.” Many had also boldly joined the waves of civil rights, feminist and anti-war activism that were sweeping the U.S.

“The Network” (now called NETWORK) officially opened our doors in April 1972. Staff members initially lived and worked in the same house in Washington, which also served as a place where local activists gathered for Saturday-night liturgies and other events. 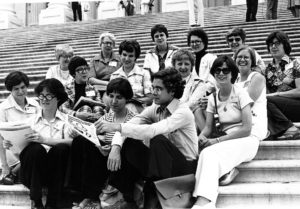 NETWORK justice-seekers soon expanded from only women religious to include thousands of women and men from all walks of life. They were united by a belief in the Gospel call for justice as exemplified in the Catholic social justice tradition.

In January 2001, President Clinton presented the Presidential Citizens Medal, our nation’s second highest civilian honor, to Sister Carol Coston, the first Catholic sister ever to receive this award. He noted that “…she helped to create NETWORK, a national Catholic lobby that has mobilized thousands of nuns and lay people to fight for social progress in South Africa, for women’s rights and for economic justice. She helped to win passage of the Community Reinvestment Act, which has led to billions of dollars in investment in our inner cities…”

On September 11, 2001, shocked staff members watched through NETWORK office windows as thick black smoke rose from the Pentagon. Immediately after the 9-11 attacks on New York and Washington, NETWORK released a statement expressing grief at the loss of life and opposing any military response that would perpetuate the violence. NETWORK took the lead in organizing subsequent anti-war protests that brought many women religious to Washington. 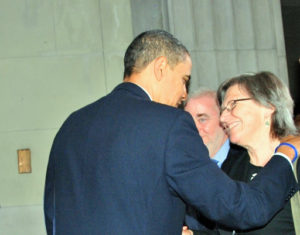 In 2010, healthcare reform took center stage under the new president. Universal access to quality, affordable healthcare had always been a centerpiece of NETWORK’s issue agenda so the organization lobbied strongly for the healthcare legislation.

Sister Simone Campbell, NETWORK’s Executive Director, composed a letter of support that was signed by 59 Catholic sisters in leadership positions. When the Affordable Care Act passed, many attributed the victory to sisters who spoke out for the bill. Sister Simone Campbell was personally thanked by President Obama and Vice President Joe Biden.

April 2012 brought a series of dramatic events starting with a big celebration of NETWORK’s 40th anniversary. Four days later, the U.S. Conference of Catholic Bishops issued a press release announcing that the Vatican had published a document harshly critical of the Leadership Conference of Women Religious (LCWR), specifically mentioning LCWR’s longstanding relationship with NETWORK as a major problem.

Nuns on the Bus 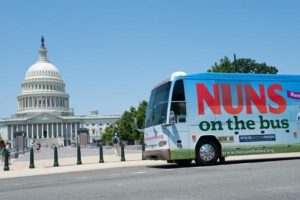 Because of this, NETWORK became a big national and international story. NETWORK staff decided to leverage this sudden fame to serve our social justice mission. As a result, a new campaign, NETWORK’s “Nuns on the Bus,” was born.

The first Nuns on the Bus journey was so successful that it became an annual event in succeeding years. Each trip focused on a different theme:

NETWORK’s greater visibility in the Nuns on the Bus era has resulted in greater clout in Washington. This and NETWORK’s many other activities continue to serve our mission of justice.