After a five hour drive from Los Angeles, we arrived in Las Vegas at the Culinary Workers Union Local 226. That afternoon, we had the opportunity to be with lead organizers and workers there for an hour and a half long conversation. 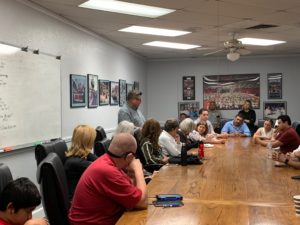 We learned that the Culinary Workers Union is the largest workers’ organization in Nevada.  It is mainly an immigrant organization made up of people from 173 countries. The union is 55% Latinx, and 54% of the members are women.

The Culinary Union recently settled a contract for 50,000 workers. They still have 2,000 workers without a contract and three other companies where contracts have not yet been settled. The campaigns are difficult.

The Culinary Union also works with non-union companies, including the Station Casinos workers. Station Casinos is the third largest corporation in Las Vegas, with ten different Station casinos. The Culinary Union estimates that there are over 6,000 workers in these casinos, and the workers have been fighting for a union for years. Since 2010, the workers have fasted, held rallies, and even sat on carts in order to win their union elections.

In 2016, workers focused their campaign on the Boulder Station and Palace Station casinos. They won the Boulder Station union election by 67% but lost Palace Station by 1%. Due to violations by the companies, the National Labor Relations Board supported the union elections, however, the companies continue not to recognize that the union won, especially the Palace Station.  The Station company is still refusing to negotiate with the workers.  In spite of this, the Culinary Union is still trying to negotiate contracts with more casinos.

The workers were sure to tell us that the owners of Station Casinos were known to be big donors to President Trump’s campaign.

Green Valley Ranch casino and the Palms were other victories for the union. The companies appealed this victory three different times in three different courts. The Culinary Union won all three of these appeals. 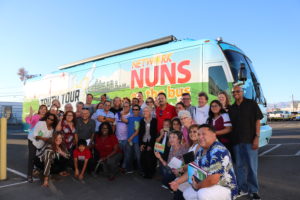 It was an eye opening opportunity to meet these women and men who have great commitment to fighting for dignity of their work. We heard powerful personal stories of the workers and witnessed their pride in developing organizing skills that will help them to earn a better living for themselves and their families. As we ended the meeting, we invited the workers to sign their name on our bus so that the bus will carry their names and their stories to Mar-a-Lago.

In the evening, we went to St. Elizabeth Ann Seton Catholic Church for our Town Hall for Justice. We shared a visual representation of the consequences of the 2017 Tax Cut and Jobs Act. We had a lively discussion that ended with some significant suggestions as to how we might fix the tax bill from those in attendance.  Some of these were: be kind to one another or volunteer for an organization that helps those in need, such as Habitat for Humanity, which assists those who are in need of affordable housing.

We ended with gratitude for those who came to our program.

View additional photos of these events on the NETWORK Lobby Flickr Page.