As the midterm elections near, events are unfolding with disturbing, rapid-fire developments, and the partisan, hate-fueled rhetoric is only ramping up.  What I’m feeling is, I imagine—along with the majority of other Americans—is akin to a child helplessly watching her parents bicker and demean each other, all the while sensing that the marriage is failing.

Last week I sat out a few days from the Nuns on the Bus tour and worked back at our office in Washington, D.C. During those days:

In so many ways, these are feeling like “Biblical times.”

I could not have planned a better way to spend the month leading up to the midterms than riding on Nuns on the Bus—it’s like an antidote to the deeply unsettling news cycle.  The gifts of the bus are manifold.  First, I am surrounded by spirited, kind women with a hope-filled vision that resists that downward spiral.  Second, we are driven (figuratively and literally) by the mission of sharing that hope with other like-minded people who desperately yearn for it.  We also visit communities where people of goodwill and creativity collaborate to lift up human dignity and support the most vulnerable, which in-turn inspires us.  There is a buoyancy and joyfulness to the Bus that is ineffable.  In Biblical terms, I’d compare it to a mini-Ark where hope and a vision for a better future manage to float just above the deluge of fear and violence. 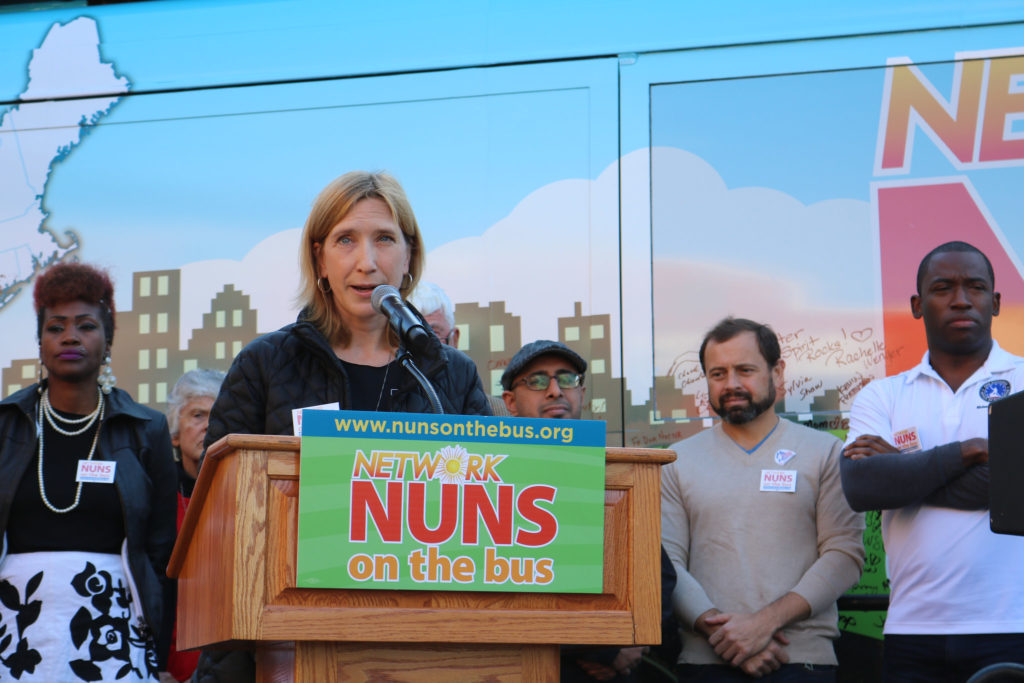 When it came time to get back on the Bus after my hiatus I felt unsure whether a pre-election road-trip about tax justice was appropriate on the heels of the worst anti-Semitic act of violence in our nation’s history.  We would be kicking-off the final homestretch to Mar-a-Lago just as families of the victims began sitting shiva.  Would a “Fiesta for the Common Good” celebration seem callous and insensitive in light of the tragic happenings taking place?

Now, heading into the final day of the trip, I’m confident that this is exactly when and where we should be.  The Nuns on the Bus demonstrate our support and commiseration with the members of the Tree of Life Synagogue in the best way we know how: by carrying on, maintaining hope and spreading the message of social justice.  We can’t look away from the kind of hatred and evil that led to the murder of 11 innocent people. But we also have to leave room to remember the love and goodness that exist in this world.  We travel in solidarity with our Jewish brothers and sisters from the Tree of Life, inspired by the words of their Talmud:

Do not be daunted by the enormity of the world’s grief.  Do justly now, love mercy now, walk humbly now.  You are not obligated to complete the work, but neither are you free to abandon it.