On a crisp and sunny morning, we stopped by the office of Representative Don Bacon (NE-02) to talk with him about the consequences his vote for the Tax Cuts and Jobs Act will have on the majority of Nebraskans. Weeks in advance, NETWORK tried to get a meeting with his office, but his office’s busy schedule did not have any openings.

Despite that, when our bus arrived outside his office, there were more than 50 Nebraskans ready to rally with us and make their voices heard.

Julie Kalkowski, of Financial Hope Collaborative- an organization that assists low-to-moderate income families in finding financial stability- spoke about the impact that the Tax Cuts and Jobs Act has on the lives of real people, and she helped us to read what is really behind what may seem to be positive numbers on the surface. For example, the income gap between women and men has diminished not because women earn more than they did before, but because men earn less.

Our second speaker, Mary Lee Brock, shared that many people are insulted when someone says they are poor because they do not want to work. The reality is that they work three or four jobs, but still cannot make ends meet. She reminded us that when affordable housing was cut in the 1980s, homelessness became normal in Omaha, affecting the whole city; family and personal financial health benefit the entire community.

At that point, a small ‘miracle’ happened: we got notice that Representative Bacon’s District Director was willing to meet with some of us who had gathered. The office also sent staff outside to collect the other constituents’ information and concerns.

Those who visited with Rep. Bacon’s District Director reported that he took notes and listened to what they had to say. That’s the power of democracy: when constituents who care about the Common Good gather and show that they care, politicians listen.

View photos from this event here. 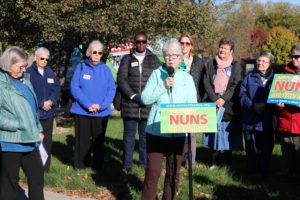