When the rally ended at the State House in Columbia, SC, we boarded the bus to travel to Savannah, GA. On our three hour trip, we had lunch, shared stories, rested, and prepared for our town hall in Savannah.

A little after 5pm, we arrived at ConneXion Church and were greeted by Rev. J. Michael Culbreth. While we ate a light dinner, people began to arrive for the town hall meeting.  It was great seeing them to go over to check out the bus and many were taking selfies with the bus. 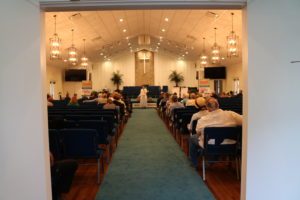 The town hall began at 6 pm with introductions and a dramatization of the 30 years effects of the passage of tax policies in the 1980s under President Reagan. Each sister had a part representing twenty percent of the population and another sister was the top one percent. By taking steps we were able to demonstrate who benefited and how the inequality grew. Then Sister Simone introduced the new tax law (passed Dec, 2017) and what will occur for each economic quintile, the one percent, and corporations. Also, with less taxes received, our federal programs that assist families and communities with necessities such as food and shelter will be cut.

The people attending the meeting shared what they are seeing here in Savannah. The first story shared brought tears as we heard that a local resident Ms. Ross  just died because she was unable to afford her asthma medication.

Others shared that population in the city of Savannah is 169,000 with 4,500 working individuals who are homeless. Tourism has taken the affordable housing and added many  low paying jobs. There was also much concern around education that the increase of private schools for those who can afford them has let the public schools to go down. Affordable healthcare at the general hospital and the need for Medicaid expansion in Georgia were also mentioned.

After this town hall, I believe Hope is people coming together.