The sight of the St. Louis Arch always brings a feeling of ‘coming home’ as I spent 8 years of my ministry in St. Louis.  Arriving at St. Alphonsus “Rock” Church brought back even more wonderful memories of serving this community.  For a little over a year I served as a caseworker at the Blumeyer Public Housing Development which surrounds St. Alphonsus “Rock” Church.  I then went to work at St. Patrick Center in the late 1980’s and early 1990’s and was involved on the team that helped launch McMurphy’s Grill.  Living at Holy Trinity Parish and serving this area of the inner-city was both an adventure and a learning experience.  I gained so much from the local people with whom I served.  Learning that we were stopping in my old home territory thrilled me beyond words. So the sight of the crowd that greeted us was so exciting! 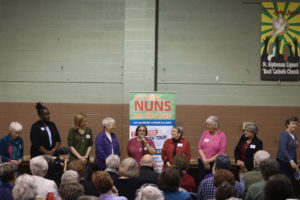 The crowd continued to swell in the gymnasium as we gathered.  More than 250 people crammed into the space with enthusiasm swelling.  People of all ages gathered to listen, learn, and share their wisdom.  Even more, I believe, we gathered to share hope for a future where everyone can flourish.  While many worked in social service programs and are seeing the impact of existing local and state budget cuts, there were a few that came to listen and learn.  One young man during a portion of small group discussion, finally spoke up.  He expressed that he was like “George,” our character that represents the 1% in the activity that the Nuns on the Bus Sisters use to demonstrate the impact of the Republican Tax Law.  He had a good job earning a significant salary and could afford things he wanted.  While he didn’t go into much detail and did not share what was going through his mind, it was obvious he was processing what he was hearing and that it was having an impact on him. 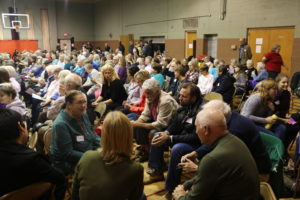 The Town Hall for Justice is an opportunity for Nuns on the Bus to educate interested persons on the impact of the 2017 tax law.  Through stories and a visual representation of the economic disparity that has taken place over the past 36 years – presented by the Sisters that are riding on the bus, the audience gets a clear picture of why the gap between the 1% and the lowest 20% has taken place.  They are moved further when the visual presentation begins to demonstrate the impact of the newly passed GOP Tax Bill.  There were obvious gasps throughout the crowd.  Many commented to us on how they were strongly impacted by the visual presentation of the economic data.  For a subject that normally gathers yawns and glazed over eyelids, those present were fully engaged and outraged. Reasonable Revenue for Responsible Programs is the call of this Nuns on the Bus trip.

The evening ended with a inviting participants to brainstorm solutions and what people can do in their communities.  Local propositions that would benefit seniors and increase the minimum wage were supported along with encouragement to educate neighbors, family and friends.  Sister Simone ended by encouraging the audience to build community and to lift each other up as we work to build a stronger foundation for the common good . . .the common good of all!  Our U.S. Constitution calls us to this very theme in its first words, “We the People.” As Sister Simone reminds us, it doesn’t say, “We the Citizens,” nor “We the Rich,” nor “We who are White.”  Rather – it says, “We the People.”  Sister Simone emphasizes that it is for all of us.

The most exciting part of the evening is the opportunity for the audience to sign the bus.  After only 10 days on the road and with another 2½ weeks to go the bus is nearly full of names and messages of support.  This is a sign that the message of hope and possibility is resonating across our country bringing together people of all ages, genders, nationalities, religious traditions and sexual orientations together.  This for me is what it means to be a faithful citizen of the United States of America.