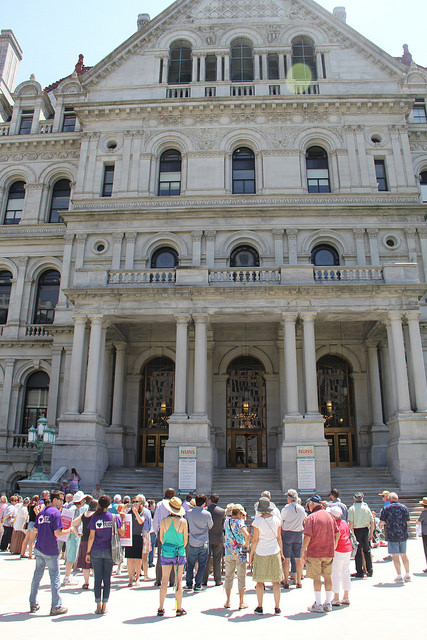 “Mend the Gaps” became so much more than a theme or a slogan when we gathered on the steps of the New York State Capitol Building in Albany and listened to Albany residents share their stories of the gaps they were experiencing and in some cases, the steps they have taken to mend them.

After years of wishing for better public transportation, the citizens of an Albany neighborhood formed and organization called A Village Inc. Willy White, its director, told us that for the residents of his neighborhood, the 1.3 mile steep hill that separated them from the local hospital was without bus service for years.  After collecting thousands of signatures on a petition, they succeeded in pressuring the city transportation authority to provide bus service.  Since its inception a few years ago, it has become the most used bus line in the city.

Eloy, a Mexican farm worker who has been in the US for more than fifteen years works twelve hours a day, six days a week and still struggles to survive. Martha, also from Mexico, came to be with her husband, a farm worker in a similar situation.  She was deeply concerned about his health because of the long hours we works, but coming to the US meant leaving their older daughter back in Mexico.  She struggles daily with the gaps in our immigration laws which don’t allow her to go back to Mexico, or for her daughter to come to NY. 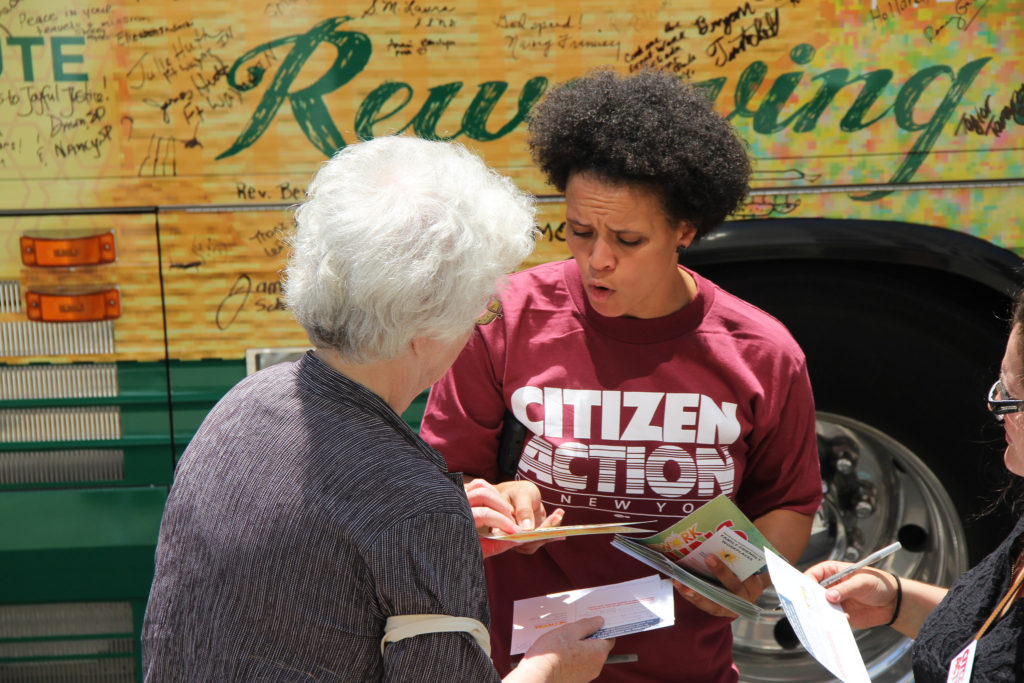 Amanda, who works for minimum wage in the fast food industry, was pregnant with her second child when she was told she was not entitled to any medical leave and would have to quit her job when she gave birth to her child. Similarly, her mother lost a job when she needed to care for Amanda’s grandmother who was critically ill.

Congressman Paul Tanko and Cathy Sheehan, the mayor of Albany, both offered warm words of support for our efforts to encourage people to join in mending the gaps. As Sister Simone often reminds people, these gaps are caused by poor policies – so they can be mended by good policies.  Those who turned out for this rally were thrilled to walk down the block to add their signatures to our bus, and to commit to doing their part to mend the Gap 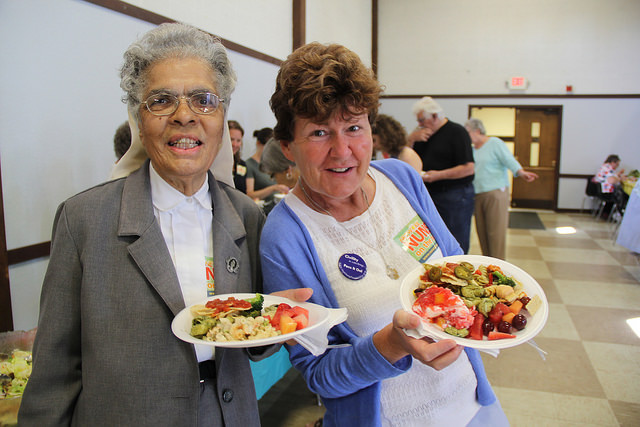 After a scenic drive to Vermont, we were welcomed to the Catholic Parish in Bennington for a pot luck supper with the local community. This informal gathering at which we mixed with the parishioners gave us opportunities to answer their questions about Nuns on the Bus.  (Do you sleep on the bus? No; Is their air conditioning?  Yes;  Are you exhausted? No:)  We were also able to share some of the stories we heard at other sites about Gaps and challenge these Vermonters to do their part to help mend the gaps.  They too, added their names to the bus as we climbed back on for our trip to New Hampshire.