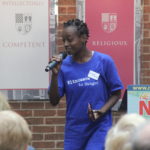 Emily is a member of Witnesses to Hunger- she is 32 years old and has two children, aged 7months and 8 years old. She explains that Witnesses to Hunger wants to change the outlook on food and housing insecurity and show people what it looks like. She explains that she wasn't homeless but did not have the necessities to live in the house and provide for her family, such as gas, food, water, or electricity.

She shares her story. She lost her little sister when she was eight years old and her sister was seven, part of what she describes as "a hectic childhood." She has been involved in service and advocacy for many years- starting with speaking to teens about sexual health to doing public speaking about her life.

She shares about how around two years ago she was staying at a shelter with her six year old child, a position she describes as "rock bottom" after experiencing an unhealthy housing situation with a slum landlord. She calls moving to a shelter in Philadelphia the hardest thing she ever had to do. She worked twelve hour days and still living in a shelter with her child. She notes that at the end of the day she wanted her child to know that no matter what happens you still go outside at the end of the day with a smile on  your face to uplift others and be a positive role model because you never know what people are going through, and that your story could help them get through.

She shares her passion for lifting up others- especially children. She shares a story of a child who spit on her son a couple weeks ago. Instead of yelling at the child she told him, "Listen, I don't know what's going on with you... but if you need something to eat, you need someplace to just hang out at for a little while, you need a cup of water, you need somebody to talk to, come knock on my door." A couple days later the child comes to the door and says, "I'm thirsty!" she asks, "Is that how you ask for something to drink?" to which he responds, "May I have something to drink?" and she said, "you sure can!" and brought him inside to have a glass of water.

She shares this story because it reminds her that what you do impacts kids more than what you say. She notes that she doesn't know what is going on in that child's life but she doesn't want to be another person who is bringing him down, she wants to be one who uplifts him. She encourages people to be a statistic of something good- to keep moving and do something with yourself.

No matter what you go through in your day, be an uplift to others. It takes one second to smile and say have a great day, or to give someone on the street a bag of snacks.

Emily ends by noting the importance of the difference among a number, and a picture, and a life, and living.