Jazmine On Our Democracy Fight 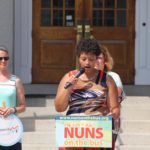 While she's heard that everyone has an equal chance of obtaining the American Dream, she calls out that this "dream" is unachievable for so many, especially those who look like her. She draws a distinction between the 'haves' and 'have nots,' some who experience systematic oppression and others who experience privilege, some who have democracy and others who only have a dream.

She shares how she is fortunate to have the opportunity of a lifetime of having her education paid for for ten years thanks to Bill Gates. She shares about how she grew up in a very poor and unstable environment, around constant drug addiction and distribution. She bounced among her mother, father, and grandparents, who were her only source of stability.

She shares how she had to grow up very fast- taking responsibility for her ten younger siblings, preparing dinner, cleaning buildings, distributing newspapers, all while going to school and playing three sports.

Jazmine shares how she's seen the racial and socio-economic gaps in our society throughout her life. Since birth she's seen the struggle of African-Americans concerning poverty, discrimination, and racial profiling. She notes recent police killings of men black men, nearly 2 per week this year.

She shares about how her step-father was mistreated by police for driving in his car at 3am, deciding that they felt threatened. Her aunt was also pulled out of her car and physically assaulted by the police. Jazmine herself cannot count the number of times she's been pulled over by police for no reason. Situations like this show her that people of color are disproportionately targeted by police.

She asks us to imagine different situations in order to visualize the difficulties faced by many people in our country due to racism, incarceration, discrimination, and/or poverty. She shows that "democracy looks different when these are your circumstances." She calls attention to how gaps of access and discrimination cause people to be disengaged in democracy.

Still, she says "I refuse to sit idly by and let others dictate democracy for us." She calls for our elected representatives and ourselves to be held accountable for mending this gap. She offers ways to fight for democracy, from fighting for legal reform to get money out of politics, educating yourself about issues, working in a nonprofit, or trying to register more voters. She inspires us all to mend the democracy gap!