Joan on a Nurse’s Story 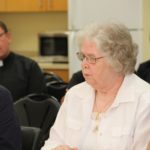 Joan shares the story of a nurse's aide who works 12 hour shifts at an assisted living facility run by the diocese.

When she called her work to tell them what happened they not only didn't ask how she was but they expected her to come to work the next day. She shared that she did return to work the next morning because she knew her coworkers would have to take care of the patients alone- with only two workers taking care of 46 patients instead of three caregivers.

She also shares the example of a secular healthcare system in Western NY that faces similar economic struggles. Two years ago they noticed high turnover, high training costs, and poor patient outcomes. They addressed this by adding 134 more staff positions, the locations of which were determined by the union.

Joan shares this story to illustrate the need for Catholic Health to follow in the footsteps of this other local healthcare group to improve staff and patient outcomes while remaining finically viable.