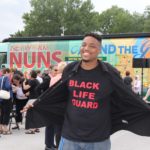 Julian is very active in the Black Lives Matter movement- believing that it's very important for everyone to be active participants in their own survival.

He began protesting when he started losing sleep, disturbed to the point of being unable to work. He began by walking with his hands up in during his lunch break solidarity with protestors  Ferguson. This grew into the local movement to fight racial inequality. He shares how it has changed his life to put effort and work toward such an important movement.

Julian calls attention to the constant systematic and institutional inequality in America's past and present. He notes that this country has never been equal and fair- especially for the black community- and he stresses the importance of continuing the fight for equality and fair treatment.

Julian shares his belief that things are on the verge of shifting, and calls people of all ages, races, sexual orientation, etc.to participate in the movement because real change comes out of unity. He calls for all people to join in the struggle for equality for all in our country.