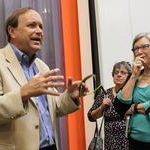 If we're really going to close the meal gap in this country, we've got to have an "end the line" strategy. So we call it "feed the line and end the line." Feeding America calls it "feed and lead." What we're trying to start...They called it "shorten and strengthen." We said that wasn't bold enough. We wanted to end it. We will continue to feed. We will get 50% bigger than we are right now. But the idea is we also want to engage in "ending line" conversations. How do we get the wage up? So we took our own--was it a year ago we did in? In September I asked the board and we went through great conversations about raising the base pay near to $15 an hour, so that anybody that works here gets $15 an hour.

We already had healthcare. What we really said was "I need the moral imperative if I'm going to go out and challenge everybody else."

Sr. Simone: Exactly. Then we've got to do it.

Sr. Simone: We had that same conversation.

Habash: I said "if we're not going to do it ourselves how are we going to go out and ask other people to do it?" So, we said we could do it. You know what? In a year it's paid for itself. The increase, because we had a turnover rate...people'll leave for 20 cents more at a warehouse job kind of thing. So we had it pay for itself in terms of not having the turnover that we were having, not having the training expenses that we were having.

Habash: It just went on and on, and it works. Nationwide Insurance just announced that they 900 employees that they just moved to $15 an hour. They've taken the step as well as one of the largest employers in town. So it's starting to catch in terms of getting people to understand. I mean I grew up in Steubenville and my dad was a construction electrician. My uncles were all steel mill guys. We grew up Catholic parochial schools. Mom never worked until I was a junior high school. We haven't figured out how to replace that in this country. That's the issue with me. We've lost the middle class because there is a one-family worker, you know, middle class, dad never made more than $40,000 a year and I've got 5 brothers and sisters, so there was a lot of us. That all worked. But somehow, as those jobs started to go away...and everybody blames overseas. We lose more jobs to technology than we do anything else. That's going to happen. Technology is going to replace workers. We've got to figure something else out, you know. You're not going to stop that from happening .You got to create. "What's the new" and "how do we start to get people to step in?"