Our Sister and the Nuns on the Bus 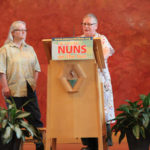 Margaret Mary Kistler was not only my little sister, she was my dear friend.

Margaret was super smart, a Merit Scholar, in fact. She was one of those folks who knew something about everything, everything about some things … and yet could talk for hours … and hours … about absolutely nothing.

Margaret marched to the beat of her own drummer, which often does not mesh well with paid employment. She primarily worked low wage or part time jobs. She embroidered fezzes for Shriners; she did office work at a flute repair shop; she came to know her way around a cash register while working retail. While she never had a great deal of money, she made enough to live independently and with her head held high.

The beginning of the remarkable journey of Margaret and the Nuns on the Bus began in a sadly unremarkable way. Margaret lost her job. She lost her health insurance. And she lost her life. In that order.

When you live on the economic margin for your entire adult life, falling ill doesn’t necessarily mean a trip to the doctor. For a couple of years, Margaret felt that something was wrong, but put off going to the doctor because she knew she couldn’t afford the care she feared she needed. While the Affordable Care Act had just been passed, it was not yet implemented. She spoke of her illness only in the abstract, not as anything for which she could afford to get help.

It wasn’t until she was too weak to answer her door that her friend broke that door down and took her to the emergency room. There, she was diagnosed with stage 4 colon cancer which had already spread to her liver and her lungs.

Her fate was sealed, but her influence was not. While Margaret was in a nursing home bed she didn’t want to be in, my wife Lynne felt a nudge, that became absolutely compelling, to go visit her. It had to happen and it had to be then, whether I could go with her or not, Lynne driving 8 hours each way. She had no idea why she had to go, but she did.

Lynne took along a Wisconsin 14 t-shirt, as Margaret had been following the protests happening at the capital here in Wisconsin at the time. Margaret and Lynne snapped a picture on the spot. Once home, when we looked at that picture … There was an undeniable honesty about it … There was a raw honesty in there. We knew something would come of it, though we hadn’t a clue what it was. We sent Margaret a copy of the picture, and asked her if it was alright for us to share it with others working on the issue of getting healthcare for all. Without a hesitation, she said, “Well, if you think that it would help, then yes!”  Mind you, Margaret was a fiercely private woman. Yet, in her fragility, in her vulnerability, Margaret had opened herself up to being seen, to being heard, to being known. If her illness and her story could be of some help to some other person, in a future she wasn’t banking on, she was all in.

When my family and I discovered that the first Nuns on the Bus tour would be in Cincinnati only two hours after Margaret’s memorial service, and only a mile from where she had lived … we decided that meeting these brave women would be our personal tribute to Margaret’s memory. Here were religious Sisters, speaking truth on behalf of people much like our own sister: that access to affordable health care and the other fibers of the social safety net meet essential human needs.

Though this is a political season, this is not about political ideology. It is a matter of life and death. How in the world can members of Congress and state legislatures such as our own, not expand Medicaid for ALL, yet claim to be pro-life? We pray that legislators’ minds be open and their hearts be broken by the realities of life and death on the economic margins.

Affordable healthcare for ALL is a pro-life stance. You would think that even a politician could understand that adequate medical care saves lives. Let’s expand Medicaid in all 50 states, or create a healthcare system that covers all, universally.

It wasn’t until a day or so after we first met these women, who were still on the road… that we saw Sister Simone holding up Margaret’s picture and sharing her story … and we thought, my God, that’s why Lynne had to go to Cincinnati … to take that picture … so that it could land in the hands of these tenacious nuns.   Still, four years on, it doesn’t feel right to be in a world without Margaret in it. Knowing that part of her lives on in the spark for social justice brings us more healing than you know.

These Nuns on a Bus have asked us to step outside of our comfort zone, and they will likely ask others to do the same. Listen to them. And then listen for your own personal nudge, doing one small part of one big thing … until the day our lawmakers hear our collective voice.

Safe travels, dear Sisters. Our hearts go with you!