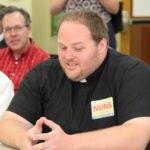 Rev. Kirk shares a story from his work in the Fight for 15 (minimum wage) campaign. Last summer they had a wage war where the governor convened their mayor and others to determine what the wage for fast wood workers should be. In time they will have the wage raised to $15 and hour- the minimum wage in upstate New York will be raised to $12.50 an hour by 2021.

He shares a story about a man named Khalil who, at the end of last year, was an expectant father working at Wendy's for $8.75 an hour. He had decent hours, roughly 30 hours a week, and had a son on the way. He noticed that he would be able to make more money to support his family by working on the street than working in fast food. In early 2016 he was ended up in jail on gun charges and missed the birth of his son. His experience led Rev. Kirk to think "wow- what are we doing"- when he gets discouraged in his work he remembers Khalil's story and is reminded that we need to do better so that people like Khalil can be there for their families.