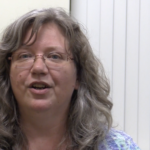 Therese shares how her family is the first to be doing work than earlier generations.

After 20 years of working for the same company, her husband lost his job when his workplace was bought out by a new company that exported the jobs overseas. He has been looking for a new job for the past year without success. As the mother of three children, she had been a stay at home mom and lost her teaching certification while she wasn't working. Now she works a part-time minimum wage job; her family relies upon food stamps and is at risk of losing their home. She is worried about her 18 year old son, who is preparing to go to college, when the price of college is too high for the family to afford.

Therese voices her frustration with the system that led her family into this situation, stating "we're doing all the things that aren't supposed to happen if you do everything right." For her, "the American dream isn't there," as her family struggles to get by.

Therese ends with her goal for her children, to raise them to be compassionate members of society, so when times are tough they will be "the helpers" to others.