After hearing that President Trump and the First Lady were scheduled to visit the Saint John Paul II National Shrine in Washington, D.C. today, Sister Simone Campbell and the entire NETWORK community expressed their disappointment at the President’s repeated calls for violence against protesters and his actions that disrespect the pain of the Black community and put Black lives at further risk. 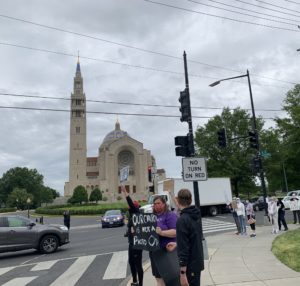 Sister Simone says, “President Trump is now using the Catholic faith in another photo op to defend his appalling refusal to address racism and police violence in the United States. He is trying to create a false dichotomy of peaceful protesters versus the Church. That could not be further from the truth, and any Christian who believes it does not understand Jesus’s message.

“Saint John Paul II himself spoke out against racism multiple times during his papacy, I hope President Trump learns that history during his visit.”