2018: Chaos and Cooperation in Congress 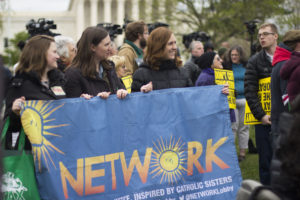 2018 saw the second session of the Republican led 115th Congress, the second year of the Trump administration, and another year of persistent challenges to mending the gaps in our country. As was the case in 2017, the Trump administration continued to cut human needs programs, relentlessly attack immigrant and refugee communities, and double down on tax breaks for the wealthy. The latest Presidential tweet or scandal seemed to dominate news headlines in 2018, often to the detriment of substantive national policy issues. Some Congressional action took place within this context, but much of our legislative success was noticeably absent from news coverage.

There is some good news to report this year: in the Senate, there was true bipartisan partnership on a number of our key legislative priorities. In contrast to 2017, Republicans in both chambers decided not to use budget reconciliation to allow the Senate to pass a bill on a simple majority vote, so cooperation was essential. Some bipartisan relationships formed quickly to tackle emergencies like the opioid crisis, others had been going on for years and finally resulted in steps toward meaningful change on criminal justice reform. In instances such as the Farm Bill and many appropriations bills, the elected officials who lead key committees agreed to take the most controversial proposals off the table in order to pass needed legislation. We are grateful for this measured leadership and believe it should be the model for how Congress works.

House Republicans took a different approach to their work this year. The Republican caucus was deeply fractured between moderate Republicans and tea party conservatives. Under Speaker Paul Ryan, Republican leadership promised that any bill passed in the House must be supported by a majority of Republicans. As a result, their legislation largely reflected conservative tea party priorities. Moderate House members supported these bills, often recognizing that the worst proposals would be removed by the Senate. They believed this political posturing would satisfy their voters.

These member of Congress were wrong. They failed to understand how their votes would impact their political support at home. At the end of the day, many of these elected officials suffered defeat in the midterm elections because of their support for controversial bills on issues such as healthcare and taxes. The 2018 election showed that voters want their elected officials to protect healthcare, social security, and other federal programs and ensure that the wealthy are paying their fair share of taxes to support these programs.

Congressional action on immigration in 2018 deserves its own analysis. As you will see in our voting scorecard, there were significant votes on different immigration policies during 2018, but the reality is that Congress failed to take any meaningful steps to fix the broken immigration system or to protect immigrants who living in the United states. Much of the Congressional action stemmed from the crisis created by the Trump administration’s decision to end DACA in September 2017. Rather than passing the Dream Act to protect DACA recipients from deportation and provide them with a pathway to citizenship, Republicans aligned themselves with the Trump administration to push significant cuts to the legal immigration system and other harsh measures to harm immigrant families. The result has been bittersweet: immigration advocates were able to convince Congress to reject these harmful proposals, but the lives of DACA recipients and their families remain at risk. At the end of a difficult year, there is much that we wish would have turned out differently, but we remain hopeful for another opportunity to work for justice in 2019 with the 116th Congress.

This story originally appeared in the January 2019 issue of Connection Magazine. Read the full issue here.