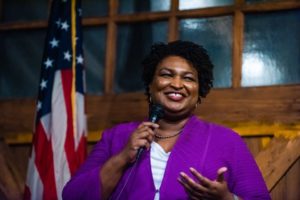 Within the corridors of government – from the highest levels of federal and state leadership to county and city municipal bodies – public servants and community advocates, carrying deeply-held motivations like faith, family, and service, fight relentlessly. Their mission: to ensure that decision-makers enact policies to enrich and protect the lives of those they govern. In my home state of Georgia, advocates continue to wage an impassioned battle for Medicaid expansion, which will cover more than 500,000 Georgians who need healthcare access. They demand a world-class public education from cradle to career to empower Georgia’s children regardless of zip code.  Refusing to accept economic insecurity as a given, they push for economic opportunity to reach every corner of our state’s 159 counties.

But dreams of expanded economic and social prosperity, of policy outcomes that truly lift up people, are built on a foundation of hearing every voice from the people, through free and fair elections in a thriving democracy. Yet, as the 2018 midterm elections proved, particularly in Georgia, from voter registration to ballot access to full confidence that votes cast are counted, our elections are in dire need of repair.

Fixing our broken democracy stands as a foundational prerequisite to progress. Our work to achieve healthcare access, education parity, social and economic justice and more, they each depend the fundamental obligation that undergirds them all—eradicating voter suppression and ensuring that our elections are fair fights.

After acknowledging the result of widespread election irregularities following my race for governor last year, I redoubled my commitment to voting rights and founded Fair Fight Action, calling on my fellow Georgians of all stripes to join me in pursuing a fair and equitable elections system that operates effectively, efficiently and equally.

In this pursuit, our strategy recognizes that the path to progress is both political and legal. Therefore, we filed a voting rights lawsuit in federal court that details how the seamless integration of incompetence and malfeasance through arcane or manipulated laws deprive citizens of their constitutional right to vote. Likewise, we have engaged in local efforts to thwart legislation that would deepen disenfranchisement, and we have participated in a national conversation about the restoration of the Voting Right Act. Our motives are simple: we cannot allow an immoral and unacceptable system of voter suppression to tarnish our elections, as we have unfortunately witnessed in full force after the Voting Rights Act was effectively neutered in 2013.

Voter suppression has ravaged voter registration, ballot access, and ballot counting processes alike. Attacks on third-party registration submissions and databases rife with errors and security concerns, the discriminatory ‘exact match’ policy blocking many registrations from voters of color, and wildly reckless voter roll purges (which once circumscribed the right to vote for a woman who had lived in the same house and voted at the same precinct continuously for over thirty years), serve as infamous examples of suppression executed by top elections officials in Georgia.

Make no mistake, while our fight has taken root in Georgia’s tarnished elections, our nation’s democracy is imperiled. While Georgia has uniquely linked together a dizzying array of voter suppression tactics, examples of voices silenced can be found across the country. Luckily, we can also hear the clarion call of faith from organizations like Nuns on the Bus, who have been warriors against discrimination and disenfranchisement for decades. From the movement in the 1960s that produced the Voting Rights Act, led by faith leaders like the Southern Christian Leadership Conference and Reverend Dr. Martin Luther King, Jr., to the Georgia churches that have directly joined our ongoing lawsuit as co-plaintiffs, voices of faith are indispensable to framing the moral imperative of free and fair elections that affirm the inherent worth and dignity of every person and every voice in our democracy.

Faith undergirds my every step in this work. My parents, retired ministers and civil rights workers, instilled in me and my siblings a deep respect for the right to vote. As we continue to demand full, unfettered voting rights for citizens in Georgia, the cradle of the civil rights movement, I call on NETWORK and its members to join us in our call for the end to voter suppression wherever it may be found. Whether through supporting the Voting Rights Advancement Act in Congress, or advocating for ballot security on the local level, or holding every presidential candidate accountable for putting forth a plan to end this abominable practice, together we can finally establish an electoral system that operates under the consent of the governed, where policies of, by, and for the people, truly flourish. And, in the process, repair democracy itself.

This story originally appeared in the April 2019 issue of Connection Magazine. Read the full issue here.