Last week, Catholics came together to call for an end of the inhumanity happening at the U.S. border and in detention camps around the country. Our day of action was an attempt to draw attention to the corrupt and deadly practices funded by our government. As a participant in civil disobedience, I was deeply inspired by the Catholic Sisters, Priests, and lay leaders participating, many of whom have spent their entire lives in the service of justice and peace. They are models of goodness, wisdom, and courage in the service of God. 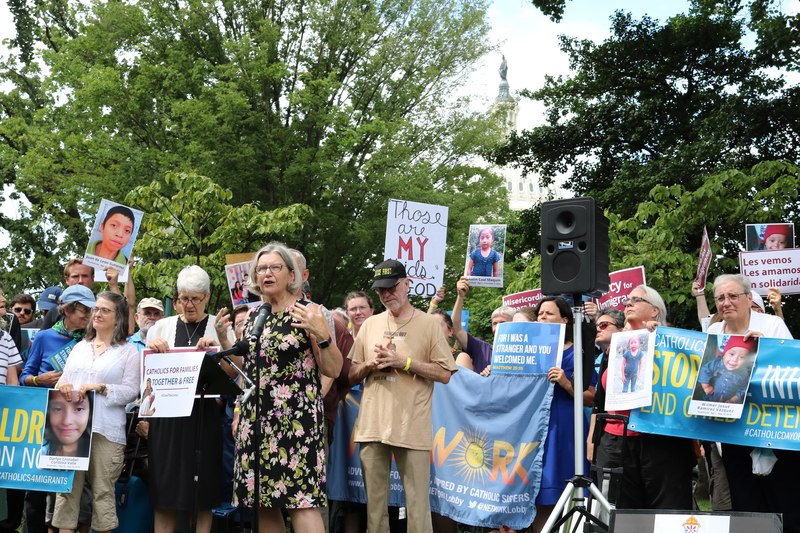 There were, however, three women participating who engaged in civil disobedience for the first time.  They are not Catholic clergy, not part of a Catholic organization or a religious order. I spoke with each of them while we were processed for violating the law. I would like to share their stories, because they offer a new model of religious activism for us.

The first woman was the mother of two teenage girls. She is one of the few people in her close circle of friends who is documented. Each of her friends desperately wanted to join in civil disobedience but were rightly concerned about the threat of deportation. She reported the pain is very deep in her community over the treatment of migrants at the border and the raids in the U.S. Her daughters discouraged her to engage in civil disobedience out of fear for their mother. Her husband too was fearful. She insisted, however, she had to join because she could. Her witness and action was a bold example of courage led by the Spirit. 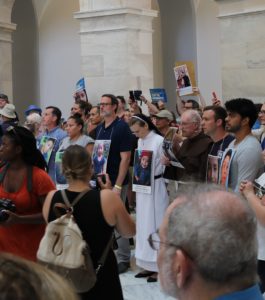 The second woman, also a mother, works for a big company and is not typically engaged in activism.  She decided to join in the action as she sat in church two weekends ago listening to the story of the Good Samaritan. Her priest posed the question, “Who is your neighbor?” and something just clicked.  While she confessed she normally is slow and methodical when making decisions, she instantly decided to participate. It was a moment of moral clarity. She followed the Spirit and took a leap of faith.

The third woman works for a local elected official. This work puts her in direct relationship with immigrant communities. She shared how her county is proactively engaging in know your rights training and trying to foster a safe community for immigrant families. She joined the action because she sees the pain and trauma in her community. She came because she wanted people to know she stands on the side of children and families in detention. She engaged in a prophetic act of witness. 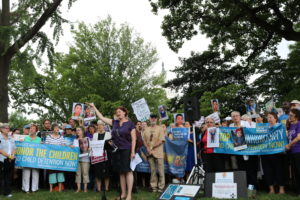 As people of faith, we are all called to act for justice. The sacred call is not limited to our faith leaders, but extends to each of us. No matter who you are, you can participate in the creative process of the Spirit and work for change. Whatever road you take – through prayer, writing a letter to your Member of Congress, joining a vigil or civil disobedience – just do it. We must show courage, act out of faith, and bear witness to the pain of our world, if we are to use our collective energy to end the inhumanity of child detention in our nation.