Catholic Social Justice Embodied at the Catholic Day of Action

As someone who grew up in a non-faith based home, I had difficulty wrapping my mind around the concept “Catholic Social Justice.” I had never thought of the three words strung together because the term social justice to me was just that, no matter what background you came from. What I have been fortunate to learn this summer as a NETWORK volunteer is that Catholic Social Justice to me means progressive, open advocates that put their faith in the forefront and back it by various acts with the intention of ensuring a better tomorrow. This was clear to me as NETWORK joined the Catholic Day of Action for Immigrant Children last Thursday, July 18. 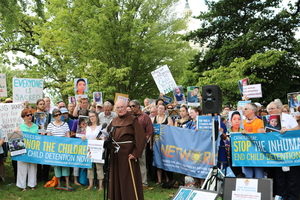 The gathering took place in the rotunda of the Russell Senate Office Building to call for an end to the inhumane and immoral practice of child detention. Sisters, brothers, and lay Catholic advocates from nearly 20 national organizations comprised the more than 200 individuals at the gathering, which was followed by 70 Catholic leaders participating in nonviolent civil disobedience. I was lucky to be present for the entirety of the gathering, which had a significant impact on me and individuals I interacted with in the rotunda. 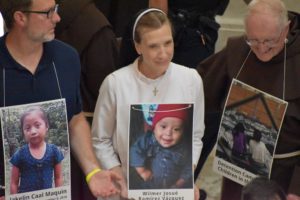 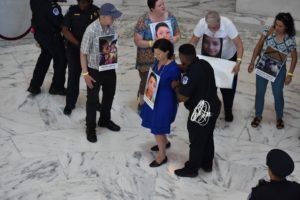 As the action went on, individuals working in the Russell building crowded the upstairs to see what exactly was going on. Displeased tones echoed behind our group from individuals jaded by “yet another protest” which they initially interpreted as Catholic extremists trying to make a point. But after asking us the reason of protest, we explained and gave them a better understanding of the concept of “Catholic Social Justice.” These same individuals were surprised by the concept and shared the appreciation I had for the participants of the action, which lead to some productive conversations.

Leaving the protest, I wondered if I too would have made those assumptions before learning more about Catholic Social Justice at NETWORK. I soon realized that regardless, I have been given the opportunity to expand my views and opinions and for that, I am thankful.