The Unbought and Unbossed Shirley Chisholm

Shirley Chisholm once said, “if they don’t give you a seat at the table, bring a folding chair.” At a time when social justice is on the line and the morals of our democratic principles are in decline, there is surely a need for more folding chairs to be brought to these decision tables.

Shirley Chisholm was not only the first Black woman to run for Congress and win, she was also the first Black woman to run for President and make it to the Democratic Convention with 152 delegates supporting her ballot. At a time when one of her opponents, George Wallace, proclaimed “segregation today, segregation tomorrow, segregation forever,” Shirley Chisholm chose to rise above what she saw and heard, and go after what she believed. She once said that she decided to run for president because “in spite of hopeless odds…” she wanted “to demonstrate the sheer will and refusal to accept the status quo.” She refused to accept the status quo and because she did, like Moses, she parted the Red Sea of what looked impossible. Chisholm worked for civil rights relentlessly, and this Black History Month, we remember her for the courageous work that she did fighting for the social justice and equality of African Americans.

The establishment of Black History Month traces back to 1926, when Carter G. Woodson, American historian and founder of the Association for the Study of African American Life and History (ASALH), established Negro History week. Then in 1976, President Gerald Ford officially recognized February as Black History Month, and every president then began to follow suit. Black History Month is a time to reflect and honor the lives of African Americans who paved the way for the freedoms and civil rights that exist today. For this month specifically, in honor of the centennial anniversary of the Nineteenth Amendment passed in 1920, that granted women the right to vote, and the sesquicentennial anniversary of the Fifteenth Amendment passed in 1870, which gave Black men the right to vote, this year’s Black History Month theme is African Americans and the Vote. The power of a vote can change the onset of elections, and with this year being a presidential election year, the theme could not be more suitable.

This year’s theme not only speaks for the need for a continuous fight towards black voting rights, but it also speaks for the need to push more Black leaders to run for local and national elections so that more seats at the table can be created. This same push is what helped Shirley Chisholm become the first black woman to be elected to Congress with her never-before-heard campaign slogan “unbought and unbossed.” At a time of racial upheaval, this slogan was bold and courageous and it’s what landed her the House of Representative position of New York’s 12th congressional district. Shirley Chisholm was bold, she was fearless, and she persisted until the very end when she passed away after suffering from several strokes in 2005.

Mrs. Chisholm is remembered today for the hard work she did for the African American community through her legislative power. From her work as a community activist, to her sponsorship of bills that supported education and families. Mrs. Chisholm was not an average legislative artisan. She sponsored bills that would increase federal funding to extend daycare facility hours and a bill to grant a guarantee minimum annual income for families. She was fierce in defending the issues that most concerned her constituents and as a result, she left an impact on the people for generations to come. At a time when seats at the table for African Americans didn’t even exist, Shirley Chisholm, pioneered to create one for the people behind her; this Black History Month, we remember her for the tireless work that she did to help our community today. 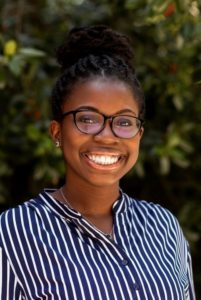 Ewaoluwa Ogundana is a Senior at Trinity Washington University studying Political Science, with a minor in Communications. In her future career, Ewaoluwa plans to continue advocating for education and immigration policies in order to help resolve the problems surrounding those issues in her community.