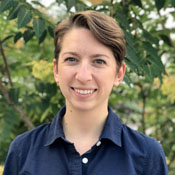 Colleen is the Communications Director at NETWORK, and she works with NETWORK's print communications, digital communications, websites, and social media. She began her career at NETWORK as a Government Relations Associate in 2014. Before coming to NETWORK she worked at St. Paul’s Lutheran Church and completed internships at the U.S. House of Representatives and the Local Initiatives Support Corporation. As an undergraduate student at Marquette University in Milwaukee, WI, Colleen was active in social justice groups that called for the creation of gender-neutral bathrooms on campus. She received her Bachelor of Arts in International Affairs and Economics from Marquette. Where she finds inspiration for work: • The example of people working for justice in a variety of ways • Interacting with people standing against injustice What she loves outside of NETWORK: • Going to the library Originally from: Troy, Michigan Why she likes D.C.: The plethora of museums and spots to experience nature

Write a Build Back Better Letter to the Editor

We Cannot Sit on the Sidelines

Build Anew: A Justice Agenda for All of Us