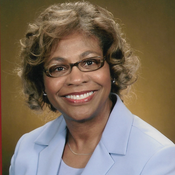 Joan Neal is the Deputy Executive Director & Chief Equity Officer at NETWORK. As the first person to serve in this role, Joan looks forward to further developing NETWORK’s unique strategy of effecting change by applying Gospel values and the framework of Catholic Social Tradition to federal policies and practices. Prior to serving in this role, Ms. Neal made significant contributions to NETWORK as a consultant for strategic planning and racial justice, and as a Government Relations Fellow advocating for reforms of the U.S. criminal legal system. Formerly, Joan served as Vice President, Institutional Planning and Effectiveness and Chief Planning Officer at Cabrini College, in Radnor, Pennsylvania, and as Executive Vice President at Catholic Relief Services (CRS) where she founded and led CRS’ U.S. Operations Division and directed CRS’ national public policy and legislative advocacy. Before relocating to the East Coast, Ms. Neal served as Associate Director of Leadership Greater Chicago, Vice President of Public Affairs at Harris Bank, and Vice President and Branch Manager at First National Bank of Chicago. Joan Neal is an Associate Member of the National Black Sisters Conference, and holds a Master of Arts in Pastoral Studies from the Catholic Theological Union where she is also a Life Trustee. She currently serves as a member of the Board of the Sister Thea Bowman Foundation (Chicago), the Center for Migration Studies (New York), the Mexican American Catholic College (San Antonio), and the Mission Committee of the Board of the University of the Incarnate Word (San Antonio).

The EQUAL Act Helps Us Dismantle and Build Anew

Black Immigrants are People Too

The Past, Present, and Future of Black Catholics in the United States

The Senate JUSTICE Act Fails to Live Up to the Moment

The Supreme Court Holds Lives of Millions in Their Hands