Nuns on the Bus: For the Media

Contact Ashley Wilson, 202-601-7856 or via email for interviews or information about Nuns on the Bus. 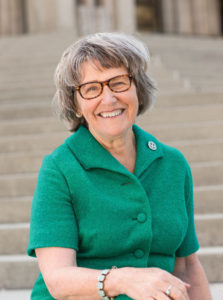 Sister Simone Campbell has served as Executive Director of NETWORK since 2004. She is a religious leader, attorney and poet with extensive experience in public policy and advocacy for systemic change. In Washington, she lobbies on issues of economic justice, immigration reform, and healthcare.  Around the country, she is a noted speaker and educator on these public policy issues.

During the 2010 congressional debate about healthcare reform, she wrote the famous “nuns’ letter” supporting the reform bill and got 59 leaders of Catholic Sisters to sign on. This action was cited by many as critically important in passing the Affordable Care Act. She was thanked by President Obama and invited to the ceremony celebrating its being signed into law.

In 2012, she was also instrumental in organizing the “Nuns on the Bus” tour of nine states to oppose the “Ryan Budget” approved by the House of Representatives. This budget would have decimated programs meant to help people in need. “Nuns on the Bus” received an avalanche of attention across the nation from religious communities, elected officials and the media.

She has led four cross-country “Nuns on the Bus” trips, focused on economic justice, comprehensive immigration reform, and voter turnout.

She is also the author of A Nun on the Bus: How All of Us Can Create Hope, Change, and Community, published in April 2014 by HarperCollins.

Nuns on the Bus Candidate Side-by-Sides