Reflection: A Kaleidoscope of Faces for the First Day 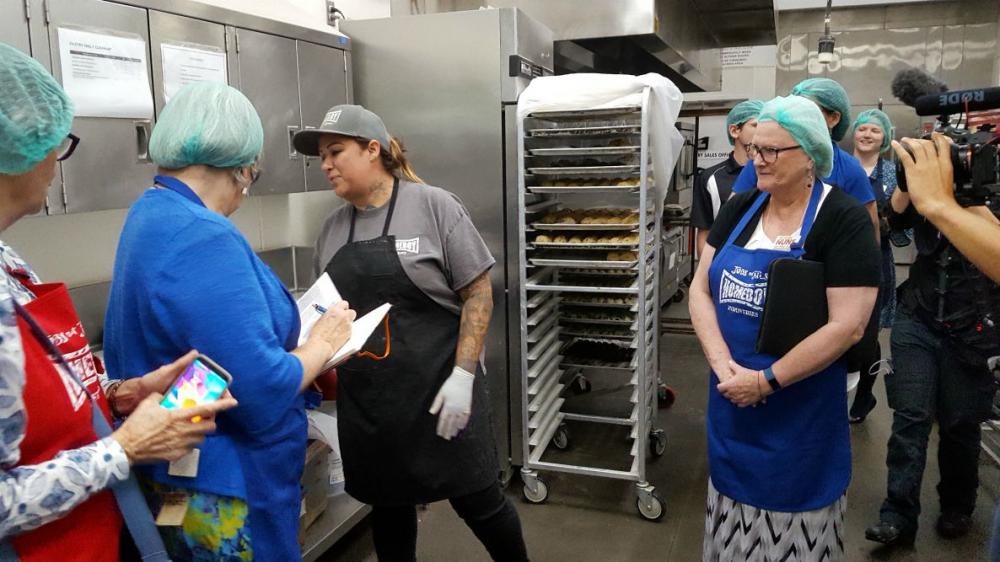 Jesuit Fr. Greg Boyle’s “awards wall” does not feature his numerous awards, trophies and citations he has won for his work as founder of Homeboy Industries in Los Angeles. 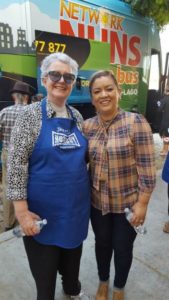 It was really an honor to meet Janet, a former client but now newlywed and a certified social worker at Homeboy Industries in Los Angeles, the Nuns on the Bus’s first site visit of the 2018 tour. (Provided photo)

The wall is full of pictures of his success stories: the men and women who have been saved from a return to a life of crime or jail by his programs, which offer jobs, training, counseling and education.

The visit to Homeboy Industries was one of the site visits the Nuns on the Bus are making to listen to people all across the United States — from Los Angeles to West Pam Beach, Florida — to see how U.S. tax policies are affecting them.

As impressive as the work they are doing is, it is the faces we will remember: Christine, the pastry chef who let us “help” on the afternoon batch of cookies (ours did not meet quality control standards because of size variation, so we had to eat them); George, the former homeboy who in his new role as security guard took pride in showing us around; Janet and Boris, who met and married after successful completion of the program.

Other highlights of the day include the happy faces of the waiting crowds, like the lady wearing an “I’m with the nuns” T-shirt and GSR freelancer Heather Adams, who wrote about the opening event. 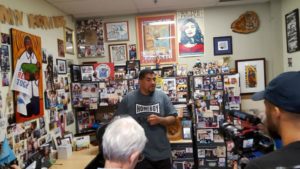 Now, would you like a tour of the bus before we get too many days down the road? This bus is a Cadillac that came “wrapped” (with its decoration) from Nashville, Tennessee. Our driver came from Nashville, too; he drove the bus to LA to pick us up. Meet Glenn Childress, driver of celebrities, including many country-music stars, actors and politicians. He has driven buses for Mike Huckabee, Mitt Romney and Hillary Clinton and spent six months with Barack Obama.

He’s driving the biggest bus I have ever seen, 45 feet and an imposing presence on the road. Inside, it has a back workroom where most of the sisters hang out, working on blogs and tweets. The staff room is in the front, and both sections have Wi-Fi and electrical connections. In the center, there is a fully equipped kitchen and restroom. 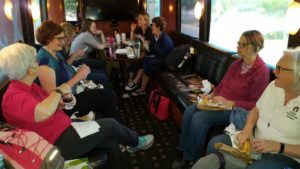 Sisters and staff use the back of the bus as workroom and living area. (GSR photo / Michele Morek)

We are staffed (assisted, bossed, waited on and shamelessly spoiled) by seven Network staff members on board, some permanent staff, some temporary. 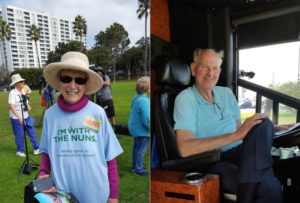 Left: It was fun to meet a fan of Nuns on the Bus at the Santa Monica beachfront at our Oct. 8 kickoff event. Right: Glenn Childress of Nashville, Tennessee, has a lot of miles under his belt and will be our driver all the way to the end of the route at Mar-a-Lago in West Palm Beach, Florida. (GSR photos / Michele Morek)

So much to share, so hard to fit in the time to do it! I wrote this at 3:45 a.m. (my body is still in the Central time zone) and am trying to type it on a bouncy bus heading for a 3 p.m. appointment in Las Vegas. This morning, after prayer and breakfast, we also accepted an award from U.S. Rep. Lou Correa from Orange, California, and led a rally outside the local offices of U.S. Rep. Maxine Waters. So keep us in your prayers as we carry you with us in our big bus!