Reflection: Nuns on the Bus Week One 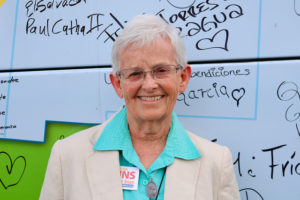 My sleep-deprived body is home after an exhilarating and exhausting week with Nuns on the Bus, joining Sister Simone Campbell and NETWORK staff to spread the message that tax justice is not achieved by permanent income tax breaks that benefit the wealthy but deprive people in poverty of programs that help to maintain their health and wellbeing.  On Sunday, October 7, I took an early morning flight from Rochester to Los Angeles to join nine other Sisters and NETWORK staff on a week of adventure and spreading the message of the need for economic justice for all.

Take-Aways from this experience:

The first evening that we gathered, Simone gave each of the bus riders a simple bracelet: a piece of elastic with one glass bead that symbolizes Hope: a hope that we bring with us and a hope that we share with all that we encounter, that together we can bring about a change, a conversion of heart, metanoia, so that we will see tax justice as caring for our neighbor in need, and not just the accumulation of wealth for ourselves.  From the Kick-Off Rally with Representatives Nancy Pelosi and Jimmy Gomez to the Town Hall for Justice in Tucson that was attended by approximately 200 people (by my scan, at least!) there was great enthusiasm and appreciation for Nuns on the Bus and our message. We also encountered those who didn’t like us and really didn’t like Democrats, but it was important to hear those voices because they signify the deep divisions in our country. We were blessed by the visit to Homeboy Industries founded by Fr. Greg Boyle.  Workers shared their stories of “Fr. G.’s” belief in them when they had given up believing in themselves.  My eyes teared when George shared with us that his son asked “Are you ever going to love us? Do we even exist for you?”  Today, he can say “I can only save myself…I do this because I have to give back to my community.”  Today George has his family back and George is here to help others who are trying to fight their way back from addictions and gang membership.

Tuesday in Las Vegas we met members of the Culinary Union 226 who are fighting for hospitality workers in the casinos. This union represents immigrants from 173 countries.  Its composition is 54% Latino and 55% women. Its diverse membership speaks over 40 different languages! They are working for new contracts for 2000 workers in three casinos whose owners have refused to give them the pay and working conditions they are entitled to, yet spend millions of dollars on their own personal entitlements and gifts to charities where their name is recognized. 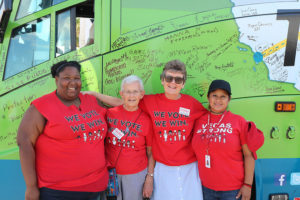 On Wednesday morning we accompanied workers who took voluntary furloughs from their jobs and cuts in pay to work for the union canvassing the community to identify residents who have not voted in recent elections and to encourage them to register and vote for candidates that will support workers and fight for tax laws that benefit the working class, not corporations!

These dedicated canvassers have been working from 9 am to 7 pm six days a week!  They return to addresses where no one is at home during the day to try to personally speak with voters they are trying to reach.  We spent only about an hour and a half in the morning but we had a taste of what workers do every day, trying to find voters at home, encountering those who are angry and even those with fierce dogs who will not answer the door!

In Phoenix, we visited the Human Services Campus where we witnessed all the social agencies sharing a common area where people in need of assistance could obtain central access.  This vision has enabled agencies to concentrate on their own specialty instead of trying to stretch resources across multiple needs. The sign at one agency, St. Joseph the Worker, reads “No one can go back and make a brand new start.  Anyone can start from now and make a brand new beginning.” 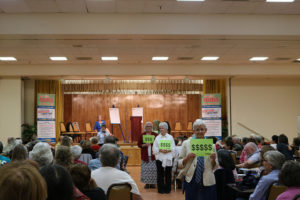 Town halls each evening had their own flavor.  Each one was different!  Sister Simone and her staff have a well-demonstrated scenario that describes people of different income levels and the effects of the Trump tax cuts on each.  Each night, we drew names to see which part we would take. Most of us had the opportunity to represent a different income quartile and the benefits given to us by the tax cut, as well as the losses we can expect when social programs are cut. These cuts affect people at the bottom levels the most as we to try to finance our extraordinary financial debt, which will not be recouped in our lifetimes or beyond!  Audience members raised issues and concerns regarding the Republican tax plan.  When they were asked to generate solutions in every audience someone said, “we have to build community.”  We can’t talk to each other on a political level before we share with our neighbors.  We have become a society of isolated individuals who thrive on fear rather than hope.

At the end of every gathering, participants were invited to sign postcards and then sign the bus!  We passed out copies of NETWORK’s Connection magazines, stickers, and postcards.  We listened as people told us their very personal stories, including their faith journeys.  What I realized is that tax justice may be the message, but it is our presence and persistence that are so valued in these times when so many feel isolated and disenfranchised.

Finally, I need to say a few words about my traveling companions! We were ten Sisters: Simone and two NETWORK staff, Mary Ellen Lacy, Quincy Howard, and seven of us: Julie Fertsch, Reg McKillip, Bernadine Karge, Dusty Farnan,  Michele Morek, Chris Machado, and me. We were joined by NETWORK staff members and Abbey Watson, trip director.  Melissa Regan, videographer, has been filming Nuns on the Bus events since 2012 and has hopes of finishing her film soon!  We were a congenial group, sharing stories, singing songs (a few!) and keeping busy with e-mails and writing blogs!  Abbey kept us on track down to the minute for take –offs and arrivals. The staff kept us well-fed with meals and snacks!

As the Bus continues its journey, I send prayers for the safety of the occupants, for the audiences that hear the message, and I pray that many will find hope in the message and in the messengers.

View photos from the trip at www.networklobby.org/photos.