Although this year’s Nuns on the Bus journey began last week in Wisconsin, I only became an official “NOTB” yesterday.   Travelling via Amtrak from my ministry as Executive Director at Providence House, a transitional and permanent housing organization in Brooklyn (founded by sisters of my congregation, the Sisters of St. Joseph of Brentwood),  I joined the sisters in Albany, New York and began my acquaintance with wonderful women – some of whom I had already met at other experiences as a “Nun on the Ferry” and through NETWORK affiliated events. 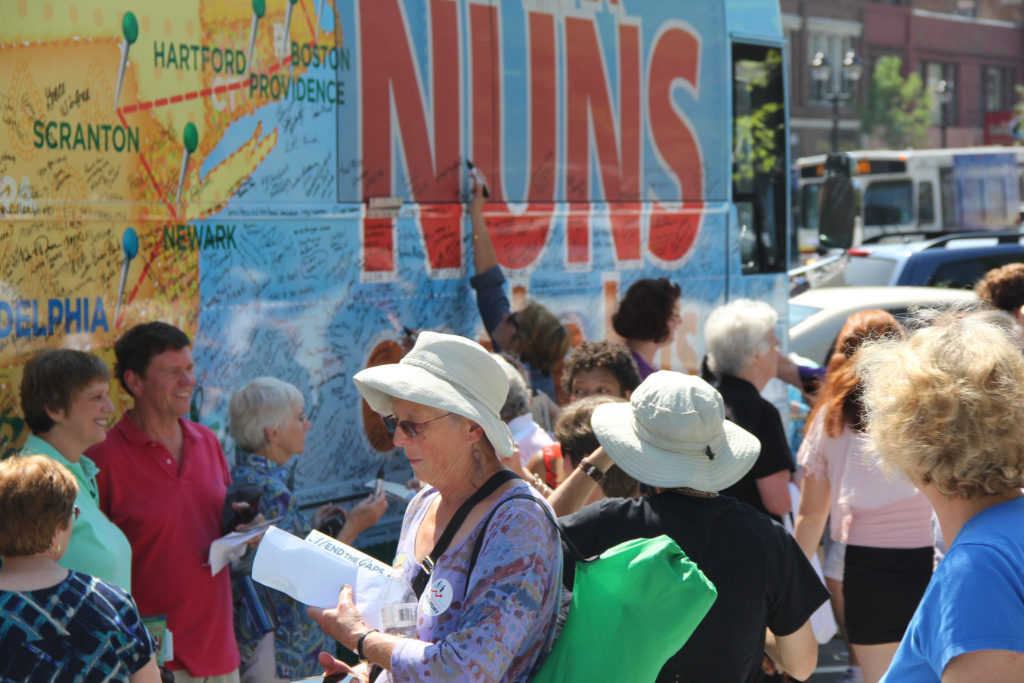 This morning as we prayed together and shared the scripture of the day, I was struck by this particular feast of Mary Magdalene, the woman who proclaimed to the disciples after the Resurrection “I have seen the Lord.” Thinking of the people I have met these two days, I too, “have seen the Lord” in the face of Christ in each of them.  I have been blessed by their trust in sharing their stories, their dreams, and yes, their passion for justice and equality for all their brothers and sisters.

Our day began by travelling to the State Capital in Concord. Shortly before the event I was met with a big surprise – my very own cousin, Gail Kinney was the local coordinator of the rally! Gail is a New Hampshire resident, a minister affiliated with the Meriden Congregational Church, long time organizer for the United Auto Workers, and a member of both  the United Church of Christ Economic Justice Ministries and Interfaith Voices of Faith groups.  Who better than Gail to welcome us!

Like rallies held before this one, 4 local residents spoke on the gaps that have most intimately affected their personal lives. The rallies are a great illustration of the power of storytelling. Two mothers told stories of the challenges of raising young children and trying to support their families. The need for a living wage and the gap that currently exists is very real. Both women were well educated yet employment that paid a living wage eluded them. When Jazmin, a biracial college student got up and spoke and told us she carries her student ID in front of her driver’s license just in case she gets stopped by law enforcement, we knew that the racism gap is real. It was one of many humbling moments for me, a woman with white skin who has never had this worry. 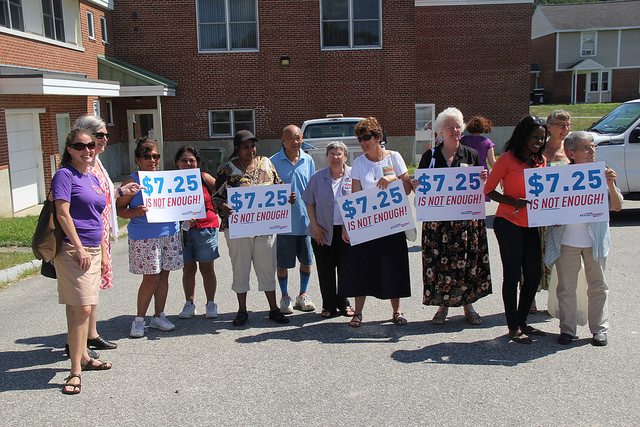 In the afternoon, the Granite State Organizing Project of New Hampshire invited us to visit a public housing development in Manchester composed of 250 units which are occupied by an extremely diverse community. The residents proudly described their newly organized Resident Council, whose motto is “togetherness is community.”  I thought of the tagline of my ministry at Providence House – “Creating Communities – Transforming Lives.”  I felt a synergy with the residents’ desire here and the strength that we all find when we are part of a caring community that supports one another!  We learned in our visit that in the past 2 years the council has developed a Homework club, English language classes, and other social activities for the whole community.   Dot who participated in their leadership training program spoke of how she learned to plan and prioritize her goals, and after 2 years was now on track to move to Georgia to reunite with family.  Dot was thrilled that we had come to visit and hear their stories.  Another humbling moment, as I thought of the women and children back home at Providence House – have I missed similar opportunities? 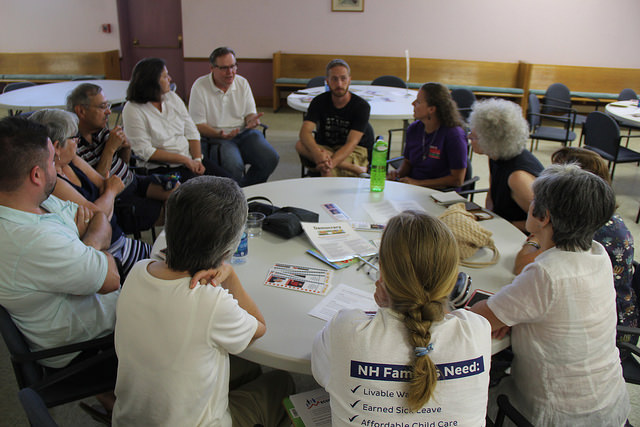 The evening was a caucus event at Holy Cross Center Manor. Spirited conversations with men and women from the local community ensued on the seven gap issues, each sister being responsible for a different gap conversation to moderate. Mine was affordable housing -– a natural fit!

Attendees talked about the unique features of the New Hampshire “citizen legislature” that really only allows wealthier citizens to be elected, thus ensuring that the laws do not really benefit the 100%.

During the report out from the small groups, we had several refugees from Bhutan share about their gratitude for Social Security Insurance for the elderly, but at the same time say they were not able to earn a living wage. A lawyer from Ghana said she was not able to continue in her same profession here in the United States and that there were many refugees and immigrants who were highly educated, but who were forced to do menial, minimum wage jobs because their licensing or training didn’t transfer.

We also heard from people who called for a single-payer healthcare system, and for tax reform to create a more just, progressive tax policy. Before we left, all attending “signed on to the bus” signifying their commitment to working on the ‘Mend the Gap’ issues. I said a heartfelt good bye to cousin Gail, and put a close to a very full day. I felt enormously blessed!