Statehood and Self-Determination for Washington, D.C.

Ahead of the House Oversight Committee hearing on H.R.51 the Washington, D.C. Admissions Act, I sent the following message to all committee members in a letter asking them to support D.C. statehood. 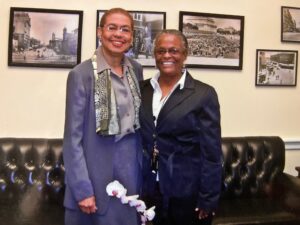 My name is Ms. Andrea Renee Reed.  I’m a resident and native of DC, a 62 year-old, grateful African-American woman. Growing up in Washington, D.C. was hard. In the 60s there were several assassinations of civil rights leaders such as President John F. Kennedy, then Malcom X, then Martin Luther King Jr., and then Robert Kennedy—all in the prime of their lives. They led with strength, character and faith.  I can remember overhearing adult conversations about events that were filled with disillusionment, hopelessness, and disempowerment.

In the following years, I have witnessed a downward spiral of disenfranchisement and an economic free fall in the District. It felt like our communities were suffering and the politicians were indifferent. Like they were only interested in using the resources of our city without reinvesting them to meet the needs of the community. Which is why I am writing in support of the Washington, D.C. Admission Act (H.R.51/S.51). This legislation guarantees right of voters to participate fully in federal elections. The more than 700,000 D.C. residents, the plurality of which are Black and Brown citizens, deserve full congressional representation and the self-determination that comes with statehood.

I moved around a lot within the District during my younger years but wherever I lived, nobody in the surrounding community owned their own homes. We all lacked ownership in the places we lived.  Every place I stayed, it was a constant struggle for me and for others in these neighborhoods. My entire experience was an attempt to escape.

It was by God’s grace that I met Ms. Carolyn Byrd who supported destitute young Black people by showing curiosity about their dreams and offering encouragement. Ms. Byrd trusted me with the great responsibility of caring for her disabled daughter, LaShonya.  She showed me that I could make choices about the direction of my life and didn’t have to live in a state of reactivity.  I still believe she could have been an effective, powerful community leader or even city council member had she had the resources available to her.  She held a vision for the District and felt ownership of it as a place to grow and to thrive, and she tried to make it better in her own way.

With her encouragement, I realized I could follow my path, so I left the District and lived many places trying to find somewhere that felt like home.  It was also during that time that I slowly and steadily gained independence and confidence.  An awareness of my contributions and capabilities became more clear to me and I also learned that unaddressed, undiagnosed mental illness had contributed to some of my struggles. With a newfound freedom I slowly began to thrive and feel like a whole person with agency. Mental health issues stagnate the abilities of citizens to meet their highest potential for growth and economic development.

Now, many years later, I chose to return to Washington, D.C. looking for healing and to reclaim my roots.  I reside in a safe environment, with a supportive community in the Petworth neighborhood.  It finally feels like home. This community has inspired me to work for change and I can see now where Ms. Byrd found her inspiration to help others. I feel the same call and that’s why I’m writing today.

I can see with new eyes how the District, as a broader community, suffers like I did growing up: discouraged, disempowered, and held down with little control of its path forward.  In addition to many of the same problems I saw growing up, now with gentrification happening, it compounds the lack of ownership for the native population.  Again, a community left out in our own home.

It is 2021, we are tired of being marginalized and having others dictate our path and our goals. Those of us who call the District home refuse to have our choices undermined or overruled by politicians from other states, some with fewer residents than Washington, D.C. We deserve to have statehood status, with proper representation and agency over our own affairs. I believe DC statehood would improve all aspects of residents’ lives including addressing homelessness and the psychological condition of the broader community, generally uplifting our spirits.

We are ready to claim our home—to TRULY take ownership—and be properly represented in Congress. We are capable of managing our own affairs just like other states. It is time to give us our agency and give the power of the vote to courageous heroes like Rep. Eleanor Holmes-Norton who has been speaking truth to power for 30 years.

Ms. Andrea Renee Reed is a member of the Assisi Community, an intentional community in Washington, D.C. committed to living simply and working for social justice.