Next time you hear the President whipping crowds into a frenzy by promising to build The Wall or attacking “illegal immigrants” there are a few facts you need to know.

Last weekend I got a real education on the topic of undocumented immigrants while visiting my daughter in Cincinnati. We attended a presentation by Nuns on the Bus, a progressive group of Catholic nuns who are social-justice warriors, (I have a soft spot for nuns because I was educated by Dominican sisters.)

Justice and humane treatment of undocumented immigrants are among the causes the sisters and their supporters fight for. 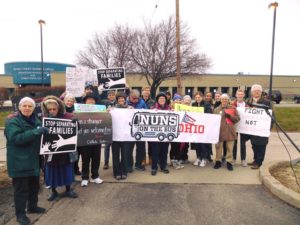 During this Lenten season it’s worth remembering that Jesus, Mary and Joseph were undocumented immigrants.

Here are a few questions for you to consider:

What would you do if every other night death squads swept through your town randomly kidnapping and killing people?

What if there were no jobs and your children were starving?

What would you do?

I don’t know about you, but if those dangerous situations dominated my home country, I would do everything within my power to escape. 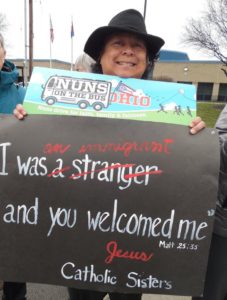 Those are the conditions and choices people in many places around the world face. Their only hope for survival is to leave and become refugees. And yes, some of them come to the United States without documentation because, frankly, getting legal long-term or permanent residency in the United States is next to impossible — unless you’re wealthy or white.

What happens to many of these undocumented immigrants in the United States is heartbreaking.

First, here are a few facts provided by the Intercommunity Justice and Peace Center:

These undocumented immigrants, who include children, are being hunted day and night by federal agents.

When caught they are put in prison as though they are murderers and held pending deportation hearings. Some have been held for as long as four years. Many don’t have access to lawyers or anyone to help them.

You see, it’s not really about homeland security, or protecting our borders. It’s about keeping jail beds full, especially in the for-profit jails and prisons.

Ultimately, it’s the taxpayers who take the weight. We’re paying an average of $20,000 a year per undocumented immigrant to keep them locked up. 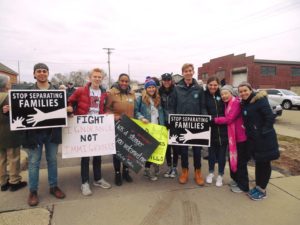 Nationally the annual detention budget for undocumented immigrants is $2.6 billion of taxpayer dollars.

It’s a money thing. People are getting rich off imprisoning desperate refugees. Don’t take my word for it, click here to read an article reported by National Public Radio.

Somehow, I don’t think that’s what Emma Lazarus had in mind when she wrote the poem inscribed on a plaque at the Statue of Liberty:

“Give me your tired, your poor
Your huddled masses yearning to breathe free
The wretched refuse of your teeming shore
Send these, the homeless, tempest-tossed to me
I lift my lamp beside the golden door!”

David D. Porter is an Orlando-based writer and the son of an immigrant.