On June 13th, I and about 15 other parents and our children went to Representative McSally’s District Office in Tucson, Arizona to raise our deep concern over the separation of families at the border. Congress is in session, so Rep. McSally was not in her office. While waiting to see if we could speak with her by phone, we sang songs, read books, and ate peanut butter and banana sandwiches. We called our visit a “play-date,” and while we were there, some of the children filled out office-supplied opinion forms. Carter, who is ten, wrote: “Please make this stop it is realy [sic] wrong.” 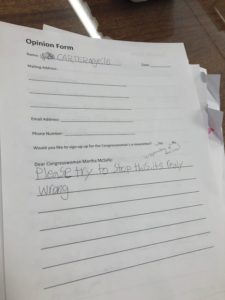 We went to McSally’s office knowing that she would not be there, but after hearing about the suicide death of Marco Antonio Munñoz after CBP agents forcibly tore his three-year-old son from his arms, and after learning that hundreds of separated children are being held at shelters right here in Tucson, we felt it urgent to reach out to her in person. We are her constituents. She represents us in Congress. Isn’t this the way representative democracy is meant to work?

McSally issued a statement in response to our visit. It began, “It is most unfortunate that this group, organized by radical activists, broke into our office today to disrupt the workplace and prevent us from serving constituents…” She went on to claim that visits like ours “distract from the many issues our country faces.” Again, we are her constituents. We were there to speak with her about an urgent issue facing our country, happening to children and families in our community.

On the night after our play-date, my three-year-old son had a nightmare. I rushed to hold him and to quiet him so he wouldn’t wake his 9-month-old sister. He’d dreamed about a tiger scratching at his window, he said. “Tiger” has become a kind of stand-in for all sorts of unknowns, particularly sounds he doesn’t recognize. I asked if he could hear the branch scraping the window in the breeze. He nodded. I asked if that could that be the “tiger.” He nodded again, and after a few minutes, he fell back to sleep holding my hand. As I lay next to him, I wondered what a stranger might have said to him if he had awoken somewhere away from me. What would have happened if he had awoken to no one?

For me, and I imagine for many others who are outraged by the barbarity of separating families, this is the root of the issue: It is inhuman to make a child alone in the world, or to place her with strangers who aren’t supposed to touch or hold her, who don’t know how to comfort her. 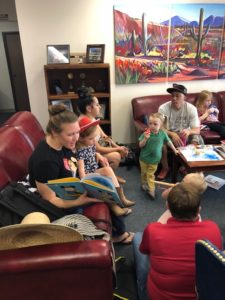 More than 2,300 children have been separated from their parents or guardians due to the Trump administration’s “zero tolerance” policy. Hundreds of these children are being held at a shelter three miles from my home. It is possible that some of them will not see their families again. Yesterday, President Trump signed an executive order to detain immigrant children in camps indefinitely, this time along with their parents.

These policies are monstrously cruel. They are an attack on things I hold very dear: family, the well-being of children, empathy, community, love. So I and my friends who are parents and our children will continue to raise this grave moral issue to Rep. McSally as well as to our senators, city councilpersons, mayor, governor, and anyone else in a position to create safe, compassionate, humane immigration policies. Play-date anyone?

Daisy Pitkin is an Assistant Professor at the University of Arizona Honors College, where she teaches critical thinking and creative writing courses. She is the proud mama of two sweet children, ages 3 years and 9 months.