I am a progressive entrepreneur and investor working to end poverty and ensure that everyone can live with financial security and afford life’s basic needs.

I co-founded Aspiration.com, an online financial institution that allows people to bank, invest, and spend in accordance with their values.

In 2015, I helped convinced California lawmakers that our state needed to pass an Earned Income Tax Credit, one of the most effective anti-poverty policies in America. It is a cash back program that rewards work and provides needed support to predominantly single mothers, people of color, and children growing up in poverty. When they agreed but failed to put any outreach money into the program, I created a non-profit organization called CalEITC4Me to ensure every eligible Californian would get the credit they’ve earned. Over the past three years, our innovative ‘surround-sound’ campaign has helped more than 2 million low-income CA families get over $4 billion in tax refunds.

In 2018, I founded Working Hero Pac a people-powered political organization to support elected leaders and candidates who champion policies that support low-income people. This year, I created a national advocacy organization called Working Hero Action.  Its goal is to elevate poverty in the 2020 presidential election while reaching hundreds of thousands of low-income workers who are not yet claiming the EITC that they’ve earned, leaving billions on the table. 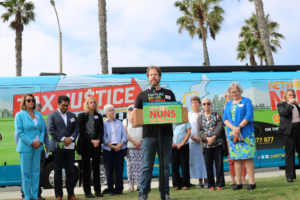 I’m most passionate about the solving the crisis of poverty — poverty of housing; poverty of health care; poverty of education and poverty of freedom from discrimination and prejudice — that afflicts a super-majority of Americans and stymies their ability to live the fullest, most human life as I believe God intends for all of us.

My mission is nothing less than an end to poverty. This country has the tools to do it; what’s missing is the political will. That’s why I’ve been working through Working Hero PAC to support political leaders who share my mission, and Working Hero Action to advocate for policies that will help all Americans afford their basic needs.

I am the founder of a California-based organization called CalEITC4Me that connects working families to the resources they need to claim their government refund from their EITC. Millions of EITC dollars go unclaimed every year, simply because so many of the people who are eligible and simply don’t know about it, don’t know how to claim it, or don’t earn enough to have to file taxes. For working families experiencing poverty, that amount of money — up to $6,000 — can be life-changing. So our job is to make sure that every family that’s get the money they’ve earned. In the past three years, our campaign has connected more than 2 million California families with more than $4 billion of tax credits, and this year we’ve expanded to Iowa and South Carolina as well. The movement is growing.

My advocacy for social justice and the impact we’ve been able to create has made me more optimistic about the future, even as I see more and more suffering. My experiences have affirmed my belief that our problems are almost always the consequences of bad choices and failed democracy, where our leaders have strayed from the will of the people. I find hope in that, because that means with better choices and a healthier democracy, we can reverse course and start to solve these problems.

My Jewish belief in the directive of “Tikkun olam” is my source of energy and inspiration every day, and especially on the hard days. Tikkun olam means that we each have a responsibility to do everything we can and make the best use our abilities to repair the world and help others.

From Dr King’s “Unfulfilled Dreams” speech of 3/3/68: “One of the great agonies of life is that we are constantly trying to finish that which is unfinishable.  We are commanded to do that.”

While I don’t want to call it a personal accomplishment, one of the things that I’m most proud of is the fact that our advocacy & activism in California has led to a dramatic expansion of the EITC over the last two years. In 2017, CalEITC4Me led a grassroots organizing campaign that won a massive expansion of the program to include self-reported freelance income—work, done disproportionately by women and people of color. And then last year, in response to our calls, texts, and emails, the legislature expanded eligibility once more to include workers age 18-24 and over age 65, meaning this tax season more working families now qualify for the EITC than ever. Now, as one of the signature proposals of his first term, Governor Gavin Newsom is proposing more than doubling the California EITC to $1 billion. This is an incredible validation of how successful the program has been, and a testament to the work of our community partners.

Right now, all my focus is on tax day on April 15. For the next two weeks, Working Hero and CalETIC4Me are going to be doing everything we can to ensure that every eligible family in California, Iowa, and South Carolina files their tax return and receives the cash refunds they’ve earned. Once tax season is over, we’ll turn to our broader mission: advocating for policies to end poverty and help all Americans afford their basic needs, including expanding the EITC and passing policies like the Green New Deal and Medicare for All.