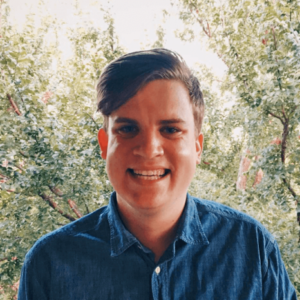 I’m a Roman Catholic activist and student pursuing a Master of Divinity degree at Brite Divinity School, a Disciples of Christ seminary in Fort Worth, Texas. When I’m not in class, I work part-time as a tutor. I’m also an intern with Pastors for Texas Children, a ministry to Texas schools that advocates for fair and equitable public school funding. I’m passionate about ecumenical cooperation, solidarity, and building a mass movement for transformative social change.

How did you first learn about NETWORK and what inspired you to get involved?

I first encountered NETWORK at a Call to Action conference, where I met Ashley Wilson (NETWORK’s communications manager). I was struck by NETWORK’s commitment to transformative change, and I’ve been hooked ever since. In college, I worked for Iowa Citizens for Community Improvement, who co-sponsored the Des Moines stop of the 2014 Nuns on the Bus tour. I’m also close friends with Sister Jeanie and Sister Elaine Hagedorn, who have been “Nuns on the Bus.” As someone who’s been “NETWORK-adjacent” for a long time, it’s exciting to get involved at a deeper level!

I’m very passionate about Church renewal and reform efforts. I’m currently a part of the Re/Generation young leaders project with Call to Action, and I work closely with several church reform initiatives like CTA, Equally Blessed, and the Women’s Ordination Conference.

As an intern with Pastors for Texas Children, I work to mobilize local faith leaders in support of Texas’ public school system. This involves both direct service ministries and policy change at the statehouse level. I’m also blessed to be at a divinity school that prioritizes justice in their mission. Through Brite, I’ve been involved with several initiatives for gender/sexual justice and immigration rights.

One of my favorite quotes is from Episcopalian activist William Stringfellow, who says that “vocation is simply being a human being.” Social justice advocacy has allowed me to affirm my own human dignity, and to affirm the human dignity of my neighbors.

Catholic social teaching and liberation theology, particularly thinkers like James Cone and M. Shawn Copeland, have been long-standing inspirations in my faith journey. Through involvement with movements like the Catholic Worker, I’ve learned that the recognition of humanity, through building a sacred and justice-oriented relationship with myself, my God, and my neighbor is what underpins the deepest expressions of my faith.

I’ll cheat and name 2: Jennifer Harvey, my undergraduate advisor, and Fr. Terry Moran, a peace and justice activist who encouraged me to apply for the NETWORK board.

“There’s really no such thing as the ‘voiceless’. There are only the deliberately silenced, or the preferably unheard.” ― Arundhati Roy

I’m so inspired by the Sunrise Movement, a movement of young people working to end the climate crisis, and the King’s Bay Plowshares 7, a group of anti-nuclear protestors facing jail time for their bold stand against militarism and white supremacy. On a personal note, I had the opportunity recently to join a rally at the Texas Statehouse organized by Texas teachers’ unions, and that was extremely inspiring.

I recently launched a podcast, the People’s Parish, that focuses on the intersections of Catholicism and progressive politics.

I’m really excited about my first NETWORK board meeting, for more episodes of the People’s Parish to drop, and to finish my M.Div. program!