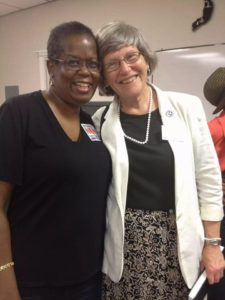 Leslye Colvin with Sr. Simone Campbell at Good Shepherd Services during a 2013 Nuns on the Bus stop in Chamblee, GA.

I am a native and resident of Dothan, AL. In addition to serving on the Boards of NETWORK, I work as the communications coordinator for Gathering for Mission, a project of Catholic Committee of the South. Founded in the 1930s, CCS is a regional network of clergy and laity addressing issues of racial and social injustice. Inspired by Pope Francis, Gathering for Mission provides practicums in dialogue for dioceses across the United States.

How did you first learn about NETWORK and what inspired you to get involved?

After years of social justice ministry in my parish, I was aware of NETWORK when I began working in Justice and Peace Ministries for the Archdiocese of Atlanta in 2011. It was during this period that I had my first opportunity to meet Sr. Simone Campbell and other women religious as part of NETWORK’s Nun on the Bus tour in 2013. More than a decade earlier, I completed JustFaith through which I gained the vocabulary to speak of what I consider to be the transcendent heart of the Gospel – the Church’s social justice tradition. It was apparent to me that NETWORK was upholding this tradition by acknowledging the dignity of those marginalized by society. Unfortunately, some of my colleagues did not share this perspective. The pushback that I received underscored the urgency of the organization’s work and strengthened my resolve to do more to support it.

Our communities and our lives are diminished by the absence of those exiled to the margins; both are enriched by their presence and voices. Understanding that our nation was established on the flawed and exclusionary concept of white privilege, I am very passionate about the resulting systemic denial of dignity and justice. My experiences as an African-American woman lead me to be an ally for and in solidarity with other people of color, the economically disadvantaged, immigrants and refugees, religious minorities, and members of the LGBTQ community.

When living in Atlanta, some of my friends rented a small house to begin the ministry of El Refugio, a house providing hospitality and lodging for those visiting men detained at Stewart Detention Center in Lumpkin, GA. El Refugio also coordinates visits with the men who are detained because of their immigration status.  After moving home to care for my mother, I realized that Lumpkin is now only an hour and a half drive as opposed to the two hours plus drive from Atlanta. I am sharing information on the ministry and recruiting volunteers while engaging them on the need for comprehensive immigration reform. Journeying to a detention center and visiting a detained man are transformative experiences.

My world view influences my advocacy. Universally, regardless of culture or faith, there is a desire for dignity. My view was enhanced when, as a graduate student, I resided in a dormitory where more than sixty percent of the residents were from other countries, and many were of other great faith traditions.

Faith and working for justice are deeply and strongly interwoven. As a Christian embracing the Incarnation, I pause in considering that Jesus lived as a marginalized and economically disadvantaged person in an occupied land. This compels me to question the standards of the society in which I live.

As a child – African-American and Catholic – in a majority Christian, yet racially segregated society, I knew early that my race and my faith tradition were obstacles for many. Sister Thea Bowman continues to inspire me to live as God’s child in a complex world.

“You have been told, O mortal, what is good, and what the LORD requires of you: Only to do justice and to love goodness, and to walk humbly with your God.”  – Micah 6:8

I am inspired by the long struggle of resistance to the indignities born of the concept of white supremacy. I am mindful of the people of the First Nations, the Africans who resisted kidnapping, and those of various ethnic backgrounds who survived dehumanizing conditions while in a land that espoused “liberty and justice for all.” Although I was born in Alabama in 1958, I know that the Civil Rights Movement of the 1960s was part of a much larger struggle for liberation and citizenship that continues today.

I have had a few monumental accomplishments within the past nine months. The first was to collaborate with six other students from the Living School of the Center for Action and Contemplation to respond to our times by writing Barmen Today: A Contemporary Contemplative Declaration. As of this moment, we have 12,000 signatories including the Living School faculty – Rev. Richard Rohr, Dr. James Finley and Rev. Cynthia Bourgeault.

Another accomplishment was traveling to Rome for the book launch of The Catholic Women Speak Network’s Visions and Vocations to which I submitted “Life, Freedom and Dignity: Reflections of A Black American Catholic.” While in Rome, I had a 40-minute interview on the concept of race with Vatican Radio.

I look forward to gathering with 40 other Living School students in a few months for an intensive program guided by Father Richard Rohr.