What Can the New Deal Tell Us about our Future?

We are at a national turning point. The coronavirus pandemic has decimated our economy, creating an unemployment level not seen since the Great Depression. We know that there will be long term impacts from this crisis, but we’re at a juncture where we have to choose: do we solve the problems of the past or double down on an economy that kills? To create an economic system that values all of our workers and provides for all in need, we will need a far-reaching legislative agenda. This is necessary and within reach. There will be a national struggle to create structural change. In order to better understand the obstacles that social justice advocates will face as we work for change, we must learn from past historical struggles that led to critical social justice legislation. 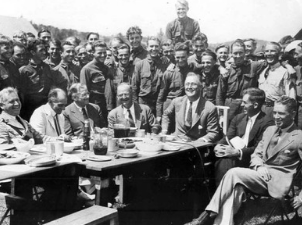 In the 1930s, our nation faced struggles that mirror our own today. In the Great Depression, unemployment reached 25%. There was collective agreement that federal policy could bring the economy back from the brink. The Democrats won the presidency and majorities in the House and Senate on a platform of relief, recovery, and reform. This platform became the New Deal. This vast package of legislation passed between 1933 and 1939 included laws that created the Social Security Administration, put people back to work through the Civilian Conservation Corps and Public Works Administration, invested in low income regions through the Tennessee Valley Authority and Rural Electrification Act, and reformed banking and labor through the Glass-Steagall Banking Act, National Labor Relations Act, Fair Labor Standards Act, and Securities Exchange Act which created the Securities and Exchange Commission. New Deal laws provided financial relief to individuals, employed millions, built nation infrastructure and public housing, protected labor, and regulated an out of control finance industry.

In hindsight, these massive legislative changes seem like common sense given the scale of the Great Depression. But at the time, there was push-back. Republican legislators were against the New Deal because of conservative anti-welfare ideology, but their influence was small due to Democratic majorities. In order to pass his legislation, President Roosevelt spent more time building coalitions of support within the Democratic Party. That included appeasing populist Democrats who wanted more wealth redistribution and labor protections, as well as joining forces with racist Southern Democrats who supported segregation. FDR’s choices have had far reaching consequences.

The President answered challenges from his left by proposing tax reform and supporting protections for labor unions. This pressure had a profound impact on federal policy, and to this day the right to organize labor is protected by the National Labor Relations Board (NLRB) that FDR created. The President also chose to work with Southern Democrats to pass his signature New Deal policies, allowing segregationist legislators to include local control of new programs. This led to many of the most important New Deal programs being unavailable to people of color in Southern states. The impact of this choice can be seen today in our generational racial wealth gap.

FDR’s biggest obstacle to his New Deal was the Supreme Court. In 1935, the conservative majority court struck down the National Industrial Recovery Act and its Public Works Administration. In 1936, the justices struck down the Agricultural Adjustment Act and its ability to adjust crop prices. These laws were signature achievements of the New Deal, and the President initially attempted to pack the courts in order to nullify the threat. This backfired spectacularly, with bipartisan rebuke. These losses forced FDR to redouble his efforts to pass legislation that could withstand scrutiny by a conservative Supreme Court.

There are many lessons to learn from the New Deal era. The most obvious is that this historic package of legislation could not have passed without single party control of the government. Negotiations were still needed to gain support for the New Deal, but it never could have happened without Democratic majorities and a national mandate from the voters. Elections have consequences.

The second important lesson is that negotiations have long term impacts. By giving into the demands of Southern Democrats, FDR left people of color out of the New Deal recovery and set them back for generations. Progressive pressure also forced FDR to go further than he originally planned, with positive consequences for all working people. Deals with the devil must be fought against, and progressive pressure can make a difference.

The third lesson is that a conservative Supreme Court will attempt to stop legislation they believe goes too far. FDR’s initial plan to change the composition of the court was a failure. The only way around this threat is carefully crafted legislation and a strong legal defense.

These three lessons – that elections are critical, negotiations have consequences, and conservative courts will be an obstacle – are important learnings for our current moment.

We are months away from a national election in which control of the Presidency, House, and Senate are on the line. Depending on who wins that election, legislative negotiations will make or break our ability to protect vulnerable communities and respond to the damage caused by the COVID-19 pandemic. And any legislation that is agreed to will have to pass the legal tests set by conservative courts.

It is our duty to learn from the past, work for the common good, and rebuild our nation for all people. To end this crisis and create an economy that reflects Catholic Social Justice, we need to embrace this challenge. We have the power to create a society that promotes justice and the dignity of all in the shared abundance of God’s creation.