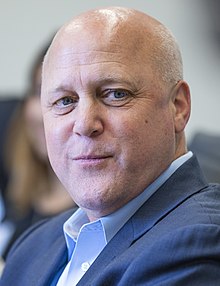 A major accomplishment of President Biden’s first year was the passage of the Infrastructure Investment and Jobs Act, a $1.2 trillion effort to modernize U.S. roads, bridges, transit, broadband, drinking water and wastewater infrastructure.

Leading this effort is Mitch Landrieu, a Catholic and former mayor of New Orleans (2010-2018). As mayor, Landrieu performed an infrastructure improvement of sorts when he removed the city’s Confederate statues.

He shared with Connection about his work for the Administration and its importance in rebuilding solidarity in society.

Q: What makes an inherently nuts-and-bolts issue like infrastructure come alive for you?

Mitch Landrieu: Infrastructure can seem like a big word – what it is really is about is building a better America and helping people in their daily lives.

With the Bipartisan Infrastructure Law, we have a once-in-a-generation opportunity – to rebuild our roads and bridges, so you can get where you need to go, quickly and safely; upgrade our ports and waterways, so you can get what you want quickly and cheaply; and expand access to high-speed internet to all Americans, so where you are from has no bearing on how high you go.

And when we do those things right, we can create millions of good-paying jobs. We can reduce costs for middle-class families. We can fight the greatest challenge of our time: climate change.

Most importantly, we can win the economic competition of the 21st century and shape a brighter future for the generations to come. That is what gets me really excited.

Q: What is the most significant aspect of the work you’ve so far overseen for the Administration?

ML: When President Biden asked me to lead infrastructure implementation, he was clear in his charge: Build a better America without unnecessary bureaucracy and delay while doing what is difficult for the sake of what is right.

And that is what we have done in the past seven months.

We have already pushed $110 billion out the door – money that is going towards cleaning up communities, fighting climate change, creating new and better jobs, a and building a bridge to our future economy. And we have got nearly 5000 projects all across the country – in every state, DC, and Puerto Rico – that are identified or are already underway.

I am also really excited about the work we’re doing to close the digital divide, both in terms of laying new broadband and providing affordable high speed internet for those who cannot afford it.

That’s real results where people live and where it really matters. And we are just getting started.

Q: What role does investing in infrastructure play in recovering a sense of solidarity in our society?

ML: President Biden often says that America can be defined in one word: possibilities.

And that’s what we are proving with the Bipartisan Infrastructure Law. We, as Americans, can do big things again.

And we can work together to get things done.

This once-in-a-generation investment in infrastructure is an opportunity to build a bridge – both literal and figurative – to the future. A bridge to a 21st century economy where every American has access to good-paying jobs. A bridge to a resilient nation that can withstand the natural disasters that tear our communities apart. A bridge to an America where no American is forgotten or left-behind – and we are more united than divided.

Bridges connect us – they connect people, communities, and the country – and that is exactly what we are doing with the Bipartisan Infrastructure Law.

Q: How does your faith inform how you approach this role?

ML: I am a big believer in the common good and lifting people up. It’s why I am so driven to racial equity work. It’s why I think we have to have a moral movement against poverty.

A Jesuit priest, Fr. Harry Tompson, who served as a mentor to so many in New Orleans, told me to “go where you can do the most good for the most amount of people in the shortest amount of time.”  That has always stuck with me.

I take that with me in my work each and every day.

Q: You removed Confederate statues as mayor of New Orleans. What did that experience teach you about community?

ML: A big part of removing the Confederate statues in New Orleans was about reconciling our past and choosing a better future for ourselves – making straight what had been crooked and making right what was wrong.

Sometimes inequity is right in front of us – like the statues were for me – but we do not see it.  Once you do see it, it is hard to look away.

The other thing that was more basic is that our public spaces belong to all of us. The names of buildings, the statues we erect, the way we remember our history do really matter. Making sure everyone is included is critical.

The future of our communities requires righting the past and building for the future. And that is what we will do with President Biden’s once-in-a-generation investment in infrastructure.

This article originally appeared in the Third Quarter 2022 issue of Connection, NETWORK’s quarterly magazine – A Time to Build. Read the entire issue here.