Alejandro Rodela on his Police Encounter 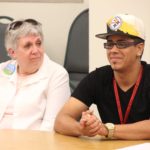 At the time he was working for a restaurant and had a two hour break to run home in his sister's car and grab a bite to eat, etc. As he was on his way back to work a police officer pulled him over and told him that the air freshener hanging from his rearview mirror was a distraction to other drivers on the road.

Alejandro shares that the car's back window is tinted, making it difficult to see through to the drivers side, leading him to the conclusion that his being pulled over by the officer had more to do with him being a young Latino driving a very nice car than the look of his air freshener.

Before attending this program, he didn't think much of this encounter. However, now he sees it is racial profiling and calls for it to stop.