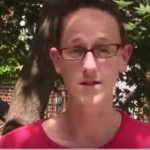 April shares part of her story of homelessness and unemployment with children. In 2014 she was arrested on drug charges and spent about 2.5 weeks in the county jail. During that time she didn't know where her daughter was or if she was safe. She was lucky enough to get treatment court, and after treatment count she was released into a world where she was homeless and had nowhere to go.

Finally she got housing but has difficulty finding a job with her record. Additionally she has no one to take care of the kids during the work day or if they get sick. She also notes that you need a job that pays well because as soon as you start working your assistance goes down while bills only go up.

April notes that there are excellent resources in her area, but she calls attention to a lack of jobs and people who want to listen.