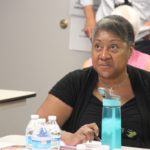 Leila grew up in an affluent area of Niantic, CT, in the only black family that wasn't chased away by the elitism of the community. She graduated from one of the best high schools and was a bright and driven student who wanted to become a minister. She moved to Indiana to attend Bible School, only to find that systematic and open racism still persisted in the area.

She shares an experience of racism in a fabric store, where a white woman was angry that she had to wait in line "for the likes of her," while the clerk reminded the woman that Leila had been before her in line, the woman alerted the manager who accused Leila of making a ruckus, sent the clerk home, and cut the woman's fabric first.

She also shares her experience working for a furniture store where, for the nine months she worked there, she was the top salesperson. However, her coworkers conspired against her and would take her customers and sales in order to get commission for the sale. By the time she left, they tole her directly that they had managed to make $70,000 off of sales that she technically should have benefitted from. She was the only black person to work there.

Leila also shares about how she was unable to complete college due to the environment triggering her bipolar disorder and her ADHD. She points out that it's difficult to get competent health care, assessment, and treatment due to her past record of dropping out, etc. which led her to be judged as a free loader.

After 16 years of marriage, Leila became a single mother in 1996, the same year that Democrats and Republicans came together to pass the Welfare Act, which disadvantages single moms. She notes that while this legislation may help policy makers and those who feel they are being taken advantage of, it does not help families. This made her family vulnerable to predators, she notes,  and led them into poverty.

Finally, Leila shares about her daughter, who was deployed in Afghanistan and returned with severe PTSD. Her daughter's marriage fell apart and she was left with two young children. They all came to live with Leila, with Leila's daughter driving to work. When their car broke down, her daughter was forced to walk or bus to work each day, a process both time consuming and dangerous in an area where winter lows can hit -25 degrees fahrenheit. Despite their best efforts they were unable to make it work and ended up in a shelter, and then later Vincent house.

Throughout this Leila maintains that "God has out backs," and gives credit to Vincent House for providing accountability and opportunity. She shares what she tells her children, that work is a blessing, and we have to be what we're created to be.