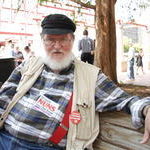 Of course, I experience the same divides that everybody in this society does, and I am very much aware, as the sister was saying at the end of her talk, of the fact that my white skin gives me privileges that other people don’t have. But the specific divides that I am here to represent are those on university campuses between adjunct faculty—who really have no status and are paid very badly, have no benefits and so on—and really the rest of the university community. Today, for instance, at St. Louis University, we’re having what we’re calling, a ‘fast for faculty.’ People are gathering in the center of the campus, talking with one another, talking with folks who come by, and fasting today in recognition of this event in hopes of catching the attention of the Pope Francis and his entourage as they are on their way to this country, to represent the Jesuit Just Employment Policy that we hope can be adopted by Jesuit institutions around the country.

So the divide that I am particularly interest in is that one and what I’m doing today to try to bridge that is participating in this kind of silent event really, in which we are talking to folks at St. Louis University about adjuncts and the situation that adjuncts face. We’re a long way at St. Louis University—well I shouldn’t say that—we’re a way at St. Louis University from making a big push toward organizing a union. However, we’re planning to do that. We hope, of course, that we can have the cooperation of the University faculty, the University’s professional faculty, and the University administration, as we work towards doing that. I was talking this morning with a friend of mine who’s a member of the professional faculty—full-time faculty—who’s very much on our side and who is speaking to folks in his department, his colleagues. There are others like that at St. Louis University who will support us. Many of the folks who are participating in this fast this morning are students. In fact, I noticed as I was sitting in the middle of the campus this morning, there were probably more students there than anybody else at that hour when I was there. So I guess that’s the answer to your question.