Ms. Angie’s Fight for the Better 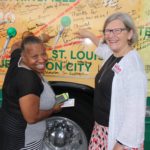 Ms. Angie is a leader in her community- here she shares her experience, stories, and vision for a better future.

Ms. Angie shares her experience of being on Social Security disability and being made to choose between paying rent and paying for the medicines that she needs to be well.

She also shares her experiences of racism, and shares her desire for a world where she can have access to the same resources that other communities have. She says, "I want to be able to live like anybody else- I want a clean community, I want resources in my community." She also shares her frustrations with an inadequate public transportation system that doesn't run on weekends, a lack of jobs, and poor housing.

Ms. Angie is a true advocate and leader in her community. She shares about her relationships with city elected officials- calling the mayor and attending city council meetings- as well as her close working relationship with the chief of police. She uses these relationships to call attention to issues in her community and advocate for fair and just treatment by elected officials and law enforcement. Ms. Angie is also active in sharing her story on media- recording events that happen in her neighborhood and sharing her story with the press and people in positions of power.

Ms. Angie works tirelessly for her community, and she fights knowing that this is a battle she can win. She calls for balance, fair treatment, and unity among the many communities in Jefferson City.

At the heart of her message is a call for unity and community. She ends her video with a reminder, that "God calls us to love eachother."