We Need to Mend the Gap in Access to Citizenship 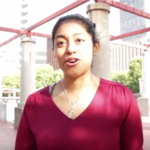 There’s a lot of discrimination that I’ve faced so many times in my life, throughout the nine years—nine, ten years—that I’ve been living in St. Louis. I’ve gone to McDonald’s, I’ve gone to Walgreens, even in my own school there’s a little bit of division with the girls or anything… Just by the way that the way that you walk into a place, they just see you as different—different skin color—and they’re just immediately saying “Okay, this one we got to watch out for.” So, I think when it comes to division, immigrants face a lot of it, obviously, because we have a different language, different skin tone, different culture. Any time that we are out, there’s some type of judgement, there’s some type of, I don’t want to say resentment, but there a little bit of people not wanting you to be here and it shows. You can sense it.

We were waiting on the two people before us to go ahead and pay. The other register opened up obviously, and she said “I can help the next person.” We were waiting for the older lady that was in front of us to go because we didn’t want to get anybody upset, because had been waiting for a while. The thing was that a man from the back, the back of the line, he just…The woman in the register said—she said it twice—she said “I can help somebody that’s next.” We just stood there because we were waiting for her, just respectfully waiting for the other lady to go and the man says “They don’t speak English. Don’t ask them anything because they don’t understand what you’re saying.” My mom and I turn and I just looked at him straight in the eye and I said “It’s alright, sir, we’re just waiting for this young…or older…or this lady to go because it was her turn. She can go ahead. Or you can go ahead.” That was it. That was the time that I spoke up verbally…really the first time ever in my life. It was something horrible at the very end because I felt scared, that there was going to be some conflict because I spoke up.