Representative Marcy Kaptur on How Long it Takes 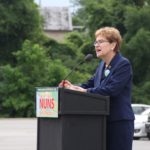 Rep. Marcy shares her experience attempting to get a World War Two memorial installed in their area. She points out that the bill for the memorial was introduced in 1987, but wasn't dedicated until 2004. This is something that the American people wanted and understood- yet it still took almost two decades to bring an idea to reality in our system.  This  experience showed her how long it takes to get anything, even projects with nearly unanimous support, through our system.

She notes that when there's disagreement, getting anything done represents real perseverance. She applauds those who show up and do advocacy and activist work for persevering in the face of a challenging system.