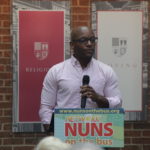 Terrell is the community engagement specialist for the Health Federation of Philadelphia and works within their program "AC Outreach Enrollment."

He shares about how at the age of 18 he had a routine checkup and discovered that he had signs that would have led to blindness without managed care. He notes that after the passing of the ACA but before the establishment of the marketplace 15% of Americans went without insurance. After 2015 we saw that number go down to 9.1% of Americans. In 2011, 1.2 million  Pennsylvanians were uninsured and people lived in fear that a slip or accident would financially ruin them and their families. Today with the ACA and the expansion of Medicaid, the uninsured rate in Pennsylvania has gone from 14% to 10%.

His program has a team of certified navigators who go through the city meeting individuals, screen them for eligibility for care, enroll them in insurance plans, and work to mend the gaps. He meets with individuals that he has enrolled at least twice a year to ensure that they don't slip through the cracks. He notes that the important thing is to meet people where they're at and when they have time to meet.

He leaves us with the call to help those we know who are uninsured to find the resources they need to find appropriate insurance.