Wayne Lee on Transportation with Disabilities 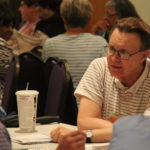 Wayne is a member of the transit advisory committee of Jefferson City- he has epilepsy and hasn't been able to drive for 49 years because his seizures are uncontrolled.

Because of this transit is the only way he can travel, besides carpooling. The busses stop operating at 5pm in Jefferson City- the only city to end public transit so early- which results in restricted abilty for people to travel after 5pm.

He also calls attention to accessibility for those with disabilities. When people are unable to travel it seriously limits their access to other spaces.