When We Make People “Other” 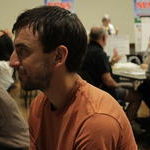 If you look at, you know, a lot of newspapers, but certainly in our region, any popular newspaper publication, like the Tennessean or the Nashville Scene, you just look at the comment section if you want to know where the divisiveness is. It's as vitriolic as possible. A lot of it...if you've see an article on wages or on incarceration, there's somebody, often somebody, often, I think someone who looks like me, a white male, who's somehow either veiled or not, talking...saying there's some racialized reason why our society is essentially stratified by race in a lot of ways. I think, it's really, in a lot of ways, these kind of other-izing of people that is really at the heart of the divide. Where, essentially I think they're saying there's something inferior about some people, group, if you really get down to it. They're not saying...They're not looking at some of the realities...that mass incarceration is...Folks who like me use and sell drugs at the same rate as black and brown people, but 3/4 of those in prison are black and brown.

O'Connor: With wealth, it's a 20:1 ratio; for every $20 there's $1 of black wealth. 18:1, I think, for Latinos.That's got historical reasons. If you really press some of these people, they would say that it's something based on inferiority, but it's our oppressive history.