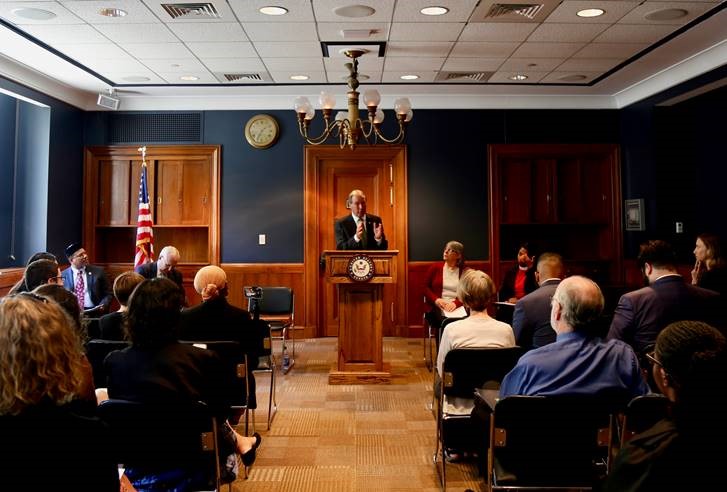 “There is a direct link between our broken campaign finance system and our voting rights system that puts up barriers to the ballot box, and the issues of concern to the faith community,” Udall said. “Issues like gun violence, food security, economic justice, and climate change. The American people, in overwhelming numbers, want Congress to address these issues. But we are not because the representatives in Congress are not representing the American people…We need to put an end to the idea that money equals free speech.  And that corporations are people.  And reign in an out of control campaign finance system.”

The Faithful Democracy Coalition is an inter-denominational campaign that began in the wake of the Citizens United decision.  The Coalition advocates for ending the dominance of big money out of politics, examining the issue from both a faith-based and legislative perspective, and focuses their campaign on the issues of climate change, gun violence prevention, immigration, and private prisons.

“The faith community recognizes how our democratic processes are corrupted at every level: from gerrymandering to voter suppression to campaign finance to foreign intrusion,” said Sr. Quincy Howard, of the NETWORK Lobby for Catholic Social Justice. “In a secular democracy, elections are the closest thing we have to a sacrament.  NETWORK Lobby and our faith partners call on our government to restore the people’s faith in our democratic systems by securing our elections, ensuring fair representation of the people, and rooting out the corrupting influence of money in politics.”