NETWORK applauds the National Black Sisters’ Conference (NBSC), National Black Catholic Clergy Caucus, National Association of Black Catholic Deacons, and the National Association of Black Catholic Seminarians for a successful four-day gathering and congratulates the newly elected NBSC Board, including Sr. Addie Lorraine Walker, SSND, NBSC’s new President, who received the organization’s Harriet Tubman Award, for being the “Moses for her people.” As she accepted, Sr. Addie Lorraine said she would “only accept the award if those in the banquet hall would accept the responsibility of being Black in a white-dominated American Catholic church.“

The National Black Sisters’ Conference, which was founded in 1968 to serve as the unifying voice and forum for religious Black Sisters, held its Board election as part of the general assembly. The new Board for the 2022 -24 term includes:  President:  Sr. Addie Lorraine Walker, SSND, who has served on the NBSC Board since 2019; Vice President: Sr. Melinda Pellerin, SSJ, who has also served on the NBSC Board since 2019; Secretary: Sr. Nicole Trahan, FMI, who will be serving on the Board for the first time; and Treasurer:  Sr. Patty Chappell, SNDdeN, who has held previous Board positions.  The other elected members of the Board include:  Sr. LaKesha Church, CPPS, Sr. Roberta Fulton, SSMN, Sr. Gwynette Proctor, SNDdeN, Sr. Patricia Ralph, SSJ, and Sr. Callista Robinson, OSF.

Sandra Coles-Bell, NBSC Executive Director reported from the gathering, “After a two-year hiatus, 150 attendees and members of four national Black Catholic organizations met for four days of reflection, study, conversation, planning, and prayer on the campus of the University of Notre Dame in South Bend, Indiana with the unifying theme of ‘Come Together Children.’ Participants were reminded of the importance of walking together in the Roman Catholic Church in the United States and the relevance of the Black Catholic voice and presence in maintaining the Roman Catholic Church in the United States. The South African principles of UBUNTU and SAWUBONA engaged participants in robust conversations on how to move prayerfully forward as Black men and women with the full force of Catholicism informed by the faith and experiences of Black people in this country.” 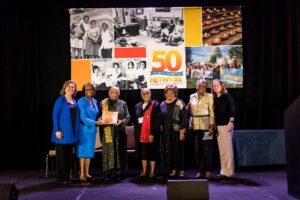 Earlier this year, NETWORK awarded the National Black Sisters’ Conference with the inaugural Distinguished Justice-Seeker Award to honor the NBSC’s dedicated and persistent witness for racial justice in the Catholic Church and society. NETWORK looks forward to collaborating with NBSC’s newly elected Board and commends the continued prophetic witness of the National Black Sisters’ Conference.